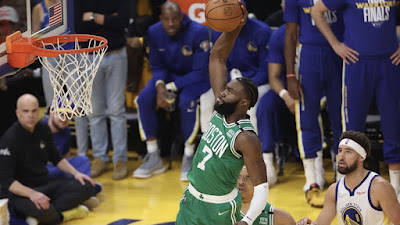 These version of the Celtics, who have zero experience in the NBA Finals, didn't falter despite being behind by 12 to start the fourth quarter, instead they used a 24-point turnaround to beat the Golden State Warriors 120-108 to take Game 1 at the Chase Center Thursday night.
Al Horford scored 11 of his 26 points in the fourth and finished with 9-of-12 from the field, including a career-high 6-of-8 from deep to go along with six rebounds and three assists. Not bad for a 15-year veteran, who is turning 36 today, making his Finals debut after playing in a NBA-record 141 previous postseason games.

"I felt like the guys kept finding me time after time. Also Derrick White hit some tough shots there, too," Horford said in postgame presser. "I was just getting the looks, knocking them down. That's that."

Jaylen Brown led the charge to start the final frame by also scoring 10 of his total 24 points. The All-Star wing had seven rebounds, five assists, two steals and a block. Derrick White continued his recent surge, hitting 5-of-8 from behind the arc to total 21 points off the bench, while Marcus Smart added 18 points (4-of-7 from 3), five rebounds and four assists to help the Celtics improve to 8-2 on the road so far during this playoff run.
Stephen Curry had a game-high 34 points and was 7-of-14 from 3-point territory, the former league MVP also contributed five rebounds and five assists. Andrew Wiggins scored 20 points in his first NBA Finals game, while Klay Thompson chipped in 15 points on 14 shots for the Warriors, who now 9-1 at home during the postseason.
Golden State had a four-point lead after the first quarter, despite Curry going 6-of-8 from 3 and scoring 21 points, the Celtics held the superstar scoreless for the rest of the half and were ahead 56-54 at the break. The Warriors were up by 15 -- the largest margin of the night -- and outscored Boston 38-24 in the third period to take a 92-80 advantage into the final frame.
The Celtics hit their first seven 3-pointers to open up the fourth and used a 22-6 run, which was capped off by back-to-back 3s from Horford, to take a lead for good. The C's outscored Golden State 40-16 in the final 12 minutes and were 9-of-12 from beyond the arc.

"It's not ideal but I believe in who we are and how we deal with adversity, how we responded all year, how we respond in the playoffs after a loss," Curry said during his postgame comments. "So learn a lot from that fourth quarter, obviously they made a lot of shots. It seemed like they didn't miss until deep into the fourth. When you have a team that just finds a little bit of momentum like they did and they keep making shots, it's tough to kind of regain that momentum."

The only lone Celtic to have an off shooting night was Jayson Tatum, who was 3-of-17 from the floor (1-of-5 from 3) for 12 points, but did have a career-best 13 assists -- setting a new league record for the most dimes in an NBA Finals debut.
The Celtics finished the night on a 17-5 run and become the first team to trail a finals game by 10 or more points after three quarters and win by 10 or more, according to ESPN Stats & Info.

"It's an unbelievable feeling just to be here and competing at this level against such a dynamic franchise the last couple years," Payton Pritchard said to reporters. "I think we're all just looking forward to the challenge to go through the series and try to get it done."

Both teams combined for 20 made 3s in the first half, which was an NBA Finals record. Game 2 is Sunday night at 8:00 ET on ABC.