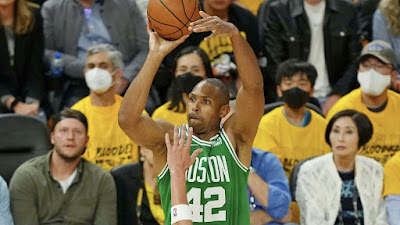 Al Horford had quite the NBA Finals debut, going off for a career-high 6-of-8 from deep to led the Celtics with 26 points in the team's 120-108 Game 1 win over the Golden State Warriors Thursday night.
The 15-year veteran didn't always have the 3-point shot in his arsenal, according to Horford, it was suggested to be added to his game as far back as year two in Atlanta. It was for Hawks general manager Rick Sund who gave Horford the tip.

"Rick is the one that told me, 'Man, you have a really good mid-range. You should start shooting corner threes, that's going to help extend your career," Horford told Yahoo Sports Saturday after practice. "I used to be a banger down low and posting up. He was like, 'Man, you're not going to last in this league if you keep playing like that.' Rick Sund was the first to tell me."

Though that conversation was had during the 2008-09 campaign, well before today's 3-point trend, Sund clearly saw something in Horford that he should develop as a big man.

"I remember our conversation very well. We were discussing if he'd be more suited as a four-man or a five," Sund told Yahoo Sports. "I believed and relayed that it would be to his advantage to develop into a stretch-five and draw guys away from the basket. I told him to work on that corner three and he'd really be an effective five-man. I also told him he'll have a great opportunity to make the All-Star as a stretch-five. This is just what I saw."

Horford recalls being reluctant to add the 3-ball to his game due to how he thought he would be perceived by his teammates and opponents.

"Coming into the league, I never imagined shooting the 3-ball. I definitely was on edge at times when I began attempting threes in games," Horford told Yahoo Sports. "Players start looking at you crazy. You know how we are in the league, like, 'Hell, nah. He's trying to shoot threes?' So it was that type of thing you had to deal with."

It took time for Horford to embrace the idea of developing a 3-point shot. In his first eight seasons, he shot a total of 65 from beyond the arc. During his ninth season as a pro he was fully committed to the 3-point shot, going 88-of-256 (34.4%) from downtown. Still, he wasn't totally confident in his new shot, but Horford gives credit to two former Hawks teammates for helping him stick with it.

"My teammates were very surprised when I started shooting them, but two big influences for me were Kyle Korver and Pero Antic," Horford told Yahoo Sports. "Both guys encouraged me to shoot the ball. And any time I shot it in the game and I looked at them to see their reaction, they were very supportive and comfortable with me shooting. So mentally for me, that was a big deal."

"When Bud came to Atlanta, he was more open to thinking outside the box, and he also encouraged Al to shoot threes and the rest is history," Sund told Yahoo Sports. "Every player that Bud coaches plays so much better than when Bud wasn't there. Look at Pat Connaughton in Milwaukee, Paul Millsap with us, Khris Middleton. He did it with Al, too."

Sunds reached out to Horford, who is shooting 46.3% from 3 this postseason, following the Celtics' Game 7 win over the Miami Heat -- someone who always believed in his ability to adapt and prolong his career.

Horford and the Celtics are three wins away from an NBA championship, which winning it all would be a real testament to the hard work he's put in over the past decade and a half.