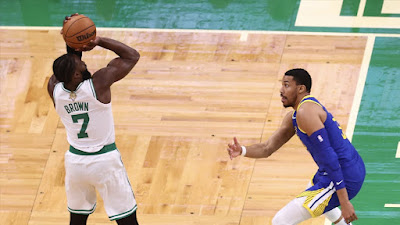 The road to a championship has come to an end for the Celtics this season, as they were eliminated by the Golden State Warriors 103-90 in Game 6 Thursday night at TD Garden.
Stephen Curry was named NBA Finals MVP -- the first of his career -- after hitting 12-of-21 from the field and 6-of-11 from deep, to go along with seven rebounds and seven assists. Andrew Wiggins added 18 points, while Jordan Poole netted 15 off the bench. Draymond Green had his best game of the series, finishing with 12 points, 12 rebounds and two assists shy (8) of a triple-double to help the Warriors capture their fourth title in eight years.

"This one hits different for sure knowing what the last three years meant, what it's been like," Curry said in his postgame presser. "Injuries, the changing of the guard, rosters, the young guys. ... Now, we got four championships. Me, Dray, Klay and Andre."

Jaylen Brown also tied a game-high with 34 points on 12-of-23 shooting and 5-of-11 from behind the arc. Al Horford recorded a double-double of 19 points (4-of-5 from 3) and 14 rebounds, while Jayson Tatum struggled on offense (6-of-18 from the floor) to only score 13 points and commit five turnovers for the Celtics, who lost three in a row after taking a 2-1 best-of-7 lead over a week prior.

Boston jumped to a 14-2 lead to start the game, before the Warriors responded with a 35-8 run, which bled into the second quarter on their way to being up by as many as 22 points and took a 54-39 advantage at the break.
The Celtics were outscored 27-17 to end the first half, but climbed their way back in what may have been their best third quarter of the series, winning the period 27-22 to cut their deficit to 10 entering the final frame.
Golden State was ahead 86-78 following a Brown 3-pointer with 5:33 remaining, the closest the C's would get the rest of the way. Another 10-3 spurt by the Warriors, which was capped off by Curry's sixth 3-pointer of the night, forced some Celtics fans towards the exits as Boston trailed 96-81 in the final 3:17 left to play.

"It's going to hurt, it'll hurt for a while probably, that stuff never goes away," said first year Celtics coach Ime Udoka said. "I've lost one before. That was part of the message. Let it propel us forward, the experience. Growth and progress that we made this season. Obviously, getting to your ultimate goal and fall a few games short is going to hurt. There are a lot of guys in there, very emotional right now.
"Just don't come back the same as players, coaching staff. Let this fuel you throughout the offseason into next year."

The Celtics head into the summer as Eastern Conference champions but fell short of their ultimate goal of winning a league-leading 18th banner -- which would have been their second title since 1986 -- after going 26-6 to end the season and all the way to Game 6 of the NBA Finals when they were barely a .500 team at 25-25 in their first 50 games of the 2021-22 campaign.
Still, turnovers became an issue throughout their playoff run for Boston, falling to 1-8 in the postseason when committing 16 or more, as they turned the ball over 23 times (playoff-high) in Game 6 against the Warriors.
Boston concludes their season with a combined record in the regular season and playoffs of 65-40.