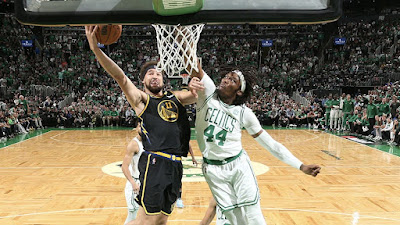 Robert Williams may have had the best performance of the postseason thus far following his a stat-line in the Celtics 116-100 Game 3 win over the Golden State Warriors Wednesday night.
The C's big man led the team in rebounds (10), blocks (4) and steals (3), to go along with eight points while being a plus-21 in 26 minutes of action.

"Rob is really a game-changer," said teammate Al Horford in his postgame presser. "We're very fortunate to have a guy like that that impacts winning in the way that he does, because it's beyond the numbers with him. It's just all the things that he brings, being in the right places."

Williams has been battling pain and discomfort throughout the playoffs in his surgically repaired left knee, but the chance to play in the NBA Finals and have the Celtics up 2-1 is too good to sit out.

"I'm just trying to be accountable for my team," said Williams, who missed games in each of the first three rounds due to partially torn meniscus. "We've made it this far. I had a discussion with myself, by pushing through this. I'm happy with how it's going. We'll worry about the injury after the season, but for now, I'm still fighting."

Marcus Smart, who is no stranger to playing through injuries (ankle and hamstring) has been a positive influence on Williams mentally as he continues to get healthier on a game to game basis.

"I'm constantly talking to Rob, just for the simple fact I know what he's going through," said Smart in his postgame comments. "He's hurting, and even though he's hurt, he still wants to get out and help his team. But at the same time, he's thinking about his career. Like I just told him, you know your body. You know what you can withstand and what you can't. But just know, we've got a chance to do something special. There's no guarantees that we'll be back here."

Williams played an important role in Game 3 on both ends of floor, as he made life difficult in the paint for Golden State, who managed just 23 points to C's 52 in the paint.

"It was huge," Celtics head coach Ime Udoka said to reporters of Williams' impact. "Not only the shots that he did block -- I think he got four tonight -- but the ones he altered, and his presence down there of course deters guys from driving. He was a big part of what we did."

While there's been plenty of days off in between the first three games of the finals, Williams knows it won't get any easier from here on out, especially with Game 5 being on the road.

"Knowing what I'm playing for, taking the risk of playing and getting this far, I've obviously got more work to do," Williams said. "But it's worth it, for sure."

Game 4 is scheduled for a 9:00 PM ET tip-off tonight from the TD Garden on ABC.
Joel Pavón
Follow @Joe1_CSP