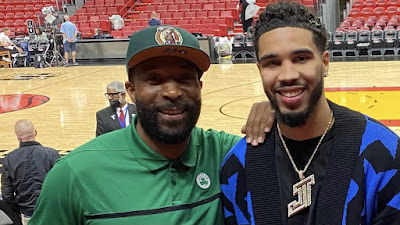 Jayson Tatum's first NBA Finals appearance didn't go as planned for either him or the Celtics, after falling to the Golden State Warriors in six games Thursday night.
The All-Star forward's shooting woes resulted in a 36.2% average from the field and 21.5 points per contest in the series. While it wasn't ideal on how things ended in on of the biggest mid-season turnarounds in league history, Tatum's dad, Justin, provided some uplifting words to his son via a "appreciation post" on Instagram over Father's Day weekend.

"These past 2 months you gave me the best Fathers Day gift a dad can ask for," Justin Tatum wrote. "Seeing you competing at the highest level and making history. Has been a dream come true. I know the competitive nature in you feel defeated and that's natural. But you won in my eyes. Leading the league in playoff minutes, being 45% of your teams offense and taking the Golden State Warriors to game 6. LiL-J hold your head up kid. You won in every category except for the Finals. Now you know what it takes. Love you son I'm soooo proud of you!"

While the relationship between Tatum and his dad is much better these days, the 24-year-old has said growing up was tough because they "didn't do normal dad/kid stuff."

"I was the number one player in the country in high school and I had other kids on my team that if they would score, I would see their dad stand up and clap," Tatum said in a 2021 interview with ESPN's Sage Steele. "I could have 40 [points] and he would never clap. He would just sit there. He would leave, like I wouldn't see him after the game.
"I would call him and say, 'Did you see what I did?' and he would say, 'You were supposed to do that.' It just drove me crazy. I would go to the gym, thinking if I do this, if I score 50, then maybe that would be good enough. Honestly, that drove me."

Despite not having the greatest outing in the NBA Finals, Tatum is still coming off his best campaign as a pro -- with a career-best in points (26.9) and assists (4.4) -- while earning an All-NBA First-Team nod during one of the Celtics' impressive turnarounds in recent memory, after a 25-25 record in the first 50 games of the season, before finishing 26-6 (good for second seed in the East at 51-31).
Tatum's points average bumped up to over 28 per-game in the first three rounds of the playoffs. A 46-point performance in Game 6 of the semifinals against the Milwaukee Bucks forced a decisive Game 7 at home and he also won the first ever Larry Bird Eastern Conference Finals MVP after averaging 25 points for the series against the Miami Heat.