Report: Why Mavericks are interested in trading for Marcus Smart 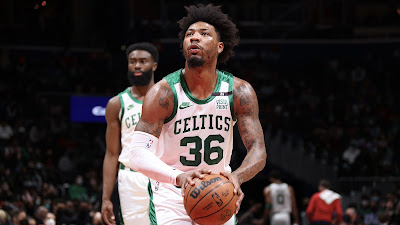 With the February 10th NBA trade deadline just around the corner, it appears that the Dallas Mavericks may be interested in Celtics guard Marcus Smart.
The Mavs have two starters respectively in Jalen Brunson and Dorian Finney-Smith on the final year of their contracts and could be willing to move one or both to improve their roster for what they hope is a long playoff run.
According to Eric Pincus of Bleacher Report, the Mavericks, who currently sit fifth in the Western Conference, have reportedly been in talks with the Detroit Pistons, Atlanta Hawks and Celtics about potential targets forward Jerami Grant, center John Collins and Smart.

"One dark-horse team mentioned as being interested in Grant was the Dallas Mavericks, with Dorian Finney-Smith and probably Dwight Powell as the primary pieces," Bleacher Report's Eric Pincus wrote. "The Mavericks have also been linked to Collins in Atlanta and Marcus Smart in Boston."

Meanwhile if the Mavs are willing to part ways with Brunson, who's having the career season with averages of 15.8 points and 5.5 assists per-contest, that could solve the Celtics passing and shooting problem if Brad Stevens is looking to possibly replace Smart as the team's starting point guard.
Dallas could be enticed to move on from Brunson's expiring deal of $1.8 million, especially with Kristaps Porzingis set to make roughly $31 million a year through the 2023-24 season and Luka Doncic's max contract kicks in at the start of 2022-23 campaign at $35.7 million.
Here's what a potential trade could look like to help give the Mavs some financial flexibility, per Josue Pavón of Heavy.com:

Marcus Smart, PG
2023 second-round pick
Smart signed a $77 million extension this past offseason and the defensive minded guard would help improve the Mavericks' starting backcourt.
The deal also helps shed some salary, as Reggie Bullock's is in the first of a three-year, $30.5 million deal he was given last summer. Another 3-and-D wing is exactly what the Celtics need off their bench, after coming off 10.9 points and 41% shooting from 3 per-game average a season ago.
Essentially this trade could benefit both parties right away, as Brunson is set to become an unrestricted free agent, but it's anyone's guess if Stevens is willing to pull the trigger on a move that would end Smart's eight-year tenure in Boston.
Joel Pavón
Follow @Joe1_CSP