Cavaliers reportedly interested in Dennis Schröder ahead of trade deadline 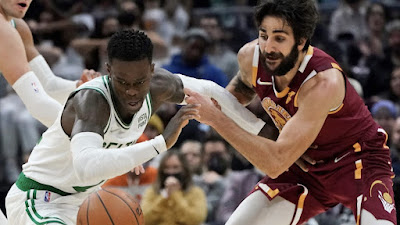 The Cleveland Cavaliers reportedly have Dennis Schröder as a possible target ahead of the February 10 NBA trade deadline.
According to ESPN insider Brian Windhorst, the Cavs could trade for the Celtics guard using their recently acquired disabled-player exception.

"Today they were granted a $9 million disabled-player exception by the league for the Ricky Rubio season-ending ACL. They can use that to trade for a player with one year left on his contract," Windhorst said Thursday afternoon on NBA Today. "League executives believe a main target for that will be Dennis Schroder, who fits into that trade exception. Such a trade would potentially take the Celtics below the luxury tax and he could help [Cleveland] on the perimeter."

At 30-19, the Cavaliers currently have the third best record in the Eastern Conference standings and are seeking to make a serious push towards the playoffs this season, but are also in need of backcourt depth after losing Rubio for the year and Collin Sexton being out indefinitely with a torn meniscus.
Meanwhile, the 25-24 Celtics sit eighth in the East, as they continue to fight for a postseason berth, Schröder could be made available -- being that he's only signed for one year and doesn't seem like he's in Brad Stevens' long-term plans. The C's have $141.7 million on the books for the 2022-23 campaign, per Spotrac.
Boston doesn't have the cap space to match any potential offers Schröder would receive during free agency. But rather than lose the veteran guard for nothing this summer, the Celtics could move him and gain assets in return.
According to NBA insider Steve Bulpett, the asking price for Schroder won't be high plus, it'll definitely get the Celtics under the tax line, so it only makes sense.

"I don't think they're looking for something huge, I think you take his money, they'll be happy with that. For those second-round picks that never get conveyed, you know? But if you keep him here, is he in the way of what you're trying to do, too much of a lure to reach for (for Ime Udoka), too much of a lure to not play? I don't think they'd ask a whole lot. But they do have the interest in getting below the cap and getting below the luxury tax," said Bulpett on Wednesday's edition of Heavy on NBA.

The 28-year-old Schröder is averaging 15.4 points and 4.6 assists in 31.1 minutes per game while shooting 44.1 percent from the field and 35.7 percent from deep this season. With his salary of only $5.9 million, he will get plenty of interest from several suitors if he hasn't already.
Whether it's the Cavaliers or some other team that dangles draft picks, moving Schröder would be beneficial for the Celtics to save cap money which only seems logical at this point, especially if Stevens plans to keep Marcus Smart -- another point guard in trade rumors and or develop second year man Payton Pritchard.
Stay tuned.
Joel Pavón
Follow @Joe1_CSP