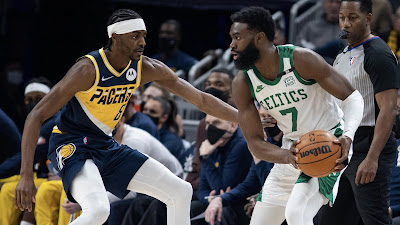 The Celtics beat the Indiana Pacers for the second time in three days, 119-100 at Gainbridge Fieldhouse Wednesday night to win their home-and-home series.
Boston snapped a six-game road losing streak, behind Jaylen Brown (34) and Jayson Tatum (33), who combined for 67 points, while Dennis Schröder -- started in place of Marcus Smart -- added 23 points. The trio went 15-of-25 from 3, as the C's improved to 21-21 on the season.

"When we can do that -- get out and run and not play against everyone's half-court set, we're better," Celtics coach Ime Udoka said. "Those two came out great and Dennis got going and put a lot of pressure on them. They've got to make shots and at the end of the day, they did that."

The Pacers were led by Myles Turner's 18 points and Domantus Sabonis' 17 points, six rebounds and six assists, despite having two starters return in Caris LeVert (Health and Safety Protocols) -- scored 16 points and Malcolm Brogdon (Achilles). Indiana lost their second straight and eight out of their last nine to fall to 15-27 on the year.
The Celtics led wire-to-wire, quickly jumping to a 10-point advantage in the first quarter, before the Pacers got within five to make it 54-49 at halftime.
Boston used a 14-5 run to start the third that was capped off with back-to-back 3s by Schröder. The veteran guard hit his third from behind the arc with 2:03 left in the period to put the Celtics up 83-64, as Indiana never recovered -- after trailing by as much as 24 the rest of the way.

"We were up five at halftime and felt like we gave up a double-digit lead so we wanted to do what we did in the first and second quarter," Udoka said. " We made two baskets, they called timeout and we felt the momentum was back in our hands."