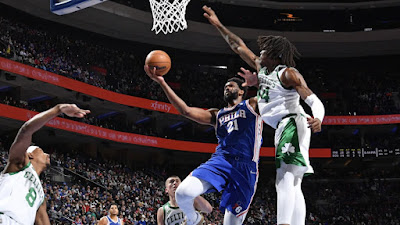 The Celtics missed a golden opportunity to win their fourth straight and get over .500 for the first time in over a month, as they fell to the Philadelphia 76ers 111-99 Friday night at Wells Fargo Center.
Jaylen Brown finished with 21 points on 7-of-17 shooting, while Jayson Tatum recorded 20 points on 7-of-18 from the field, to go along with 11 rebounds and five assists in the near blowout.

"The slow start doomed us," Boston coach Ime Udoka said. "I have to do a better job of getting our guys ready to play. They were coming off a loss and played a little harder than we did. It's on me."

Payton Pritchard scored 17 points off the bench and Robert Williams notched a double-double of 12 points, 14 rebounds for the Celtics, who are under .500 again at 21-22 following the first night of a back-to-back.
Marcus Smart missed his second straight game after being placed into the NBA's Health and Safety Protocols.
Joel Embiid, who led the 76ers with 25 points and 13 rebounds, was five points shy of setting a franchise record of scoring 30 or more in nine straight games. He remains at eight, tying Wilt Chamberlain and Allen Iverson.
Tyrese Maxey added 23 points, five assists, while Tobias Harris (nine rebounds) and Seth Curry (seven assists) each netted 17 points respectively for the now 24-17 Sixers.
Boston opened the game on a 8-2 run before they were outscored 30-6 to end the first quarter. The 76ers led by as much as 22 before halftime.
The Celtics never got any closer than within 15 in the third period or in the final frame. With 9:27 left to play and Philadelphia up 89-72, Udoka pulled his starters.

"There wasn't much going there, so I wanted a spark from our younger guys and tomorrow's game played into it," Udoka said.

Despite shooting 47.4% from the floor, including going 11-of-31 from deep (35.5%), the Celtics turned the ball over 20 times which led to 31 points for the Sixers. Philadelphia only had 10 turnovers that resulted in 16 points for the away team.
The Celtics return to TD Garden Saturday night to host the Chicago Bulls (27-13) on a second night of a back-to-back. Tip-off is at 8:30 PM ET.