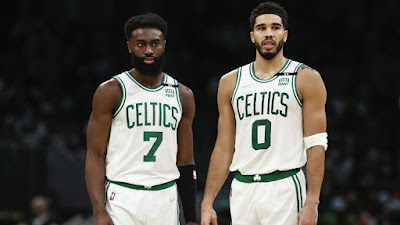 The Celtics were lucky enough to pull off a 101-98 overtime win over the Indiana Pacers Monday night, despite the team turning the ball over 20 times and shooting well under 40% from the field.
It was Jaylen Brown who lead all scorers with 26 points, including the jumper to put Boston ahead (93-91) for good in the final three minutes. He also finished with a team-high 15 rebounds to go along with six assists.
Meanwhile, Jayson Tatum hit a game-tying corner fadeaway to send it to OT, while also recording 24 points and 12 rebounds on the night to help secure the victory.

"It felt great," Tatum said during his postgame presser. "I felt like that one would have hurt had we lost. But, throughout the course of the season, it feels good to figure games out like that when we're not shooting the ball well. And, I had all those turnovers but just figuring out, and cleaning stuff up later. But, most important, we were just telling ourselves to find a way to try and win this game."

While the shorthanded Pacers were without Caris LeVert (Health and Safety Protocols) and Malcom Brogdon (Achilles), it was the play of Tatum and Brown down the stretch that helped Boston get through the adversity of  holding it together after blowing yet another double digit lead.
It was only this past Saturday that the two Celtics All-Stars had, what they called, a much needed conversation following the team's disappointing 108-105 loss to the New York Knicks -- where Boston led by as much as 25 -- but were beat on a buzzer beating 3-pointer to end the game.
Tatum spoke upon once again not only about that recent conversation but also on the narrative that he and Brown can't figure it out thus far into the 2021-22 campaign.

"We see all the things about "we can't play together" and everybody in the media is saying that one of us has got to go, and we just had a talk," Tatum said. "We both want to be here, and we both want to figure it out because (there's) not many players in the league like JB. The grass isn't always greener. And, we had some great stretches, and I just think that this year hasn't been what we expected but, I think, in the long run, it'll be good for us."

Though it wasn't pretty, Tatum was asked if the Celtics ugly win over the Pacers at home showed any growth for the team.

"I think so," Tatum replied. "I think some of our execution, down the stretch, late in the fourth, and in overtime was a lot better than some of our previous games early this year. So, that's for sure stepping in the right direction."

However, Tatum added that there is still a lot of work to do if he and Brown want to prove their naysayers wrong to salvage the season.

"We got to figure some things out but I think the most important thing is we both want it extremely bad, and we want to try to figure it out together," Tatum said. "For us to just be on the same page, I think, is extremely important -- just knowing that we got each other's back. And, we going to give it all we got to figure this out, regardless of what people may say."

The Celtics' young duo will get another crack at the Pacers Wednesday night in their second game of a home-and-home series on the road.
Joel Pavón
Follow @Joe1_CSP