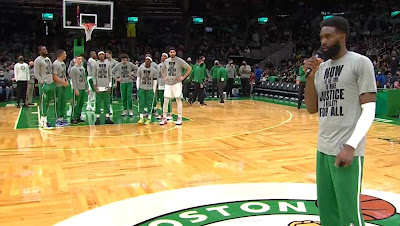 Jaylen Brown addressed the TD Garden crowd about Martin Luther King Day just prior to Monday's matinee between the Celtics and New Orleans Pelicans.
The All-Star wing spoke about honoring the legacy of Dr. Martin Luther King, Jr and how systemic racism is still alive not only in Boston but also around the world.

Institutionalized racism is real thank you Dr.MLK the fight is continued! pic.twitter.com/6UQQKwcqrT

"Today, we honor the life and the legacy of Dr. Martin Luther King, Jr. In doing so, it’s important to emphasize his life’s work and what he sacrificed his life for, his message to get across," Brown said. "Systemic racism is real. It plagues the city of Boston as well as the rest of our society. Thank you to Dr. Martin Luther King and continue with others that have sacrificed their life and platform for the cause we all believe in. Rest assured, the fight is continued."

Celtics coach Ime Udoka also called playing on MLK Day an honor before tip-off, as the NBA has continued to celebrate the holiday over the years.

"To look at the opportunity for myself and others to be in this position, it's an honor, Udoka said in his pregame presser.

The league had a 12-game schedule Monday, which the Celtics kicked off with a 12:30 PM ET start.
Joel Pavón
Follow @Joe1_CSP