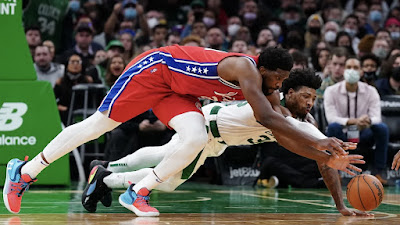 Marcus Smart remains in the NBA's Health and Safety Protocols, as the Celtics guard is set to miss his third straight game Saturday when the team host the Chicago Bulls.
The veteran sat out Wednesday night's blowout win over the Indiana Pacers due to a right thigh contusion before entering the league's COVID protocols and being listed as questionable ahead of Friday's matchup vs. the Philadelphia 76ers.


Smart, who's averaging 11.6 points, 4.0 rebounds and 5.3 assists per contest, more than likely returned an inconclusive test and or was held out for contract tracing -- that eventually led to not clearing protocols and missing the last two games. The Celtics are 1-4 this season when Smart has not played.
Dennis Schröder will probably get the starting nod in Smart's place once again with Payton Pritchard getting more minutes as the back up point guard, especially after scoring 17 points in the loss to the Sixers -- his second game back after clearing health and safety protocols.
Per league's new COVID protocols, Smart could return as soon as six days. He could be back in Boston at the end of the Celtics' four-game homestand against the Charlotte Hornets next Wednesday or Portland Trail Blazers come next Friday.
Celtics and Bulls tip-off tonight from TD Garden at 8:30 PM ET.
Joel Pavón
Follow @Joe1_CSP