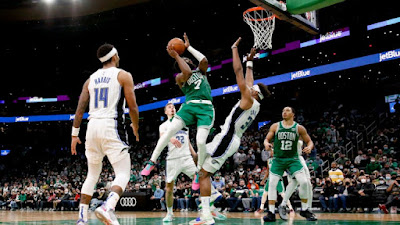 Jaylen Brown was not going to let the Celtics lose in their first game of the new year, after dropping 50 points, as the All-Star wing led a fourth quarter rally that resulted in an overtime victory against the Orlando Magic Sunday night.
In addition to his new career-high in points -- on 19-of-29 shooting from the field and 5-of-10 from deep -- Brown also recorded 11 rebounds, four assists, two blocks and a steal in 46 minutes to help the C's beat the Magic 116-111 at TD Garden.
Boston blew a 14-point lead and then were down by the same margin, before Brown took over, scoring 21 in the fourth quarter -- including a game tying and go-head layup with 30.9 seconds left in regulation.
According to Brown, he hadn't even realize he surpassed his previous career-high of 46 (this season against the New York Knicks) until the final seconds of the fourth quarter.

"I looked up and I had 47 and I was like, 'Damn,'" Brown said following the win. "Then I hit the three off the Smart pass to get to 50, but I wasn't even really paying attention until it got to that."

While the Celtics have had two impressive wins over the Phoenix Suns and now the Magic over the past few days, they have also been without Jayson Tatum for the last four games, something that has allowed Brown to learn how to lead by example and step up in crucial moments.

"Good days and bad days, but I'll continue to learn and grow in those positions and help my team down the line," Brown said. "We'll get rolling, especially when we get [Jayson Tatum] back, and we get the rest of our guys back.
"These last couple of games I think I've learned a lot."

Head coach Ime Udoka explained to the media how when Brown lets the game come to him it helps slows things down rather than forcing the issue.

"With him, it's really, not overthinking it. Taking what's there in front of him, said Udoka in his postgame presser. "Just simplifying it and letting the game come to him. I think I told him that in Minnesota. He's rushing a little bit, just let it come. You got the whole game to get to where you need to get to."

"The growth with JB is very real," Smart said in postgame comments. "I think we've all witnessed it."

Dennis Schröder was also happy for Brown but not at all surprised that the wing finally reached the 50-point plateau, something only seven players in franchise history have done and only three others around the NBA have also notched already this season.

"It's about time that he scored 50, said Schröder to reporters. "I mean, he always scores in the first half. When I was in health and safety protocols, I seen him score 25 or more in the first half, or 20, but then in the second half he just… But I mean this time, he did what he's supposed to do.

"At the end of the day, he's just trying to play the right way and tonight was being aggressive and going downhill," Schröder added. "And nobody could stop him tonight. So I think that's what he needs to do more often, be more aggressive."

Schröder was holding a signed No. 7 Brown jersey at the podium during his presser and when asked about it, he simply just smiled.

"That's for my nephew," Schröder said. "That's his favorite player. He got 50 today, so I thought it was a good time to let him sign it."

As the Celtics are off to a good start in 2022, Brown also recognized that it being a new year, him and his teammates are trying to get rid of any old habits that kept rearing their ugly heads over the pass 12 months.

Boston, at 18-19 on the season, will look to use some of momentum when they host the San Antonio Spurs Wednesday before heading to Madison Square Garden Thursday to face the New York Knicks on a second night of a back-to-back.
Joel Pavón
Follow @Joe1_CSP