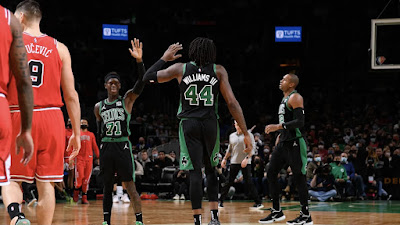 The Celtics rallied late to beat the shorthanded Chicago Bulls 114-112 Saturday night at TD Garden.
Robert Williams hit four clutch free throws in the fourth quarter, including a pair with 9.7 seconds left to finish with 14 points and 13 rebounds, to go along with six assists and two blocks, as Boston scored the final eight points after trailing 112-106 to improve to 22-22 on the season.

"It's a moment everybody in this league wants and waits for. I'm glad I made them," said Williams during his postgame presser. "I'm glad my teammates had my back. It boosted my confidence."

Jayson Tatum led the way with 23 points and 12 rebounds, while Jayson Tatum added 19 points, seven rebounds. Dennis Schröder started in place of Marcus Smart, recording 16 points, eight assists and Al Horford chipped in 15 points.
The Celtics, playing on a second night of a back-to-back after a 111-99 loss to the Philadelphia 76ers  Friday, have won four of their last five games. Coach Ime Udoka was pleased with how his roster held their composure down the stretch, something they have improved on from earlier in the season.

"We've been in a lot of tough games like this and the guys have been growing from it," Udoka said. "To the credit of our guys, they got down a little bit and never hung their heads, continued to fight and dug their way back out of it."

Chicago was also playing on a second night of a back-to-back after 138-96 blowout loss at home to the Golden State Warriors. Nikola Vucevic scored 27 points on 12-of-27 shooting and DeMar DeRozan had 23 points, eight rebounds and seven assists. Ayo Dosunmu notched a double-double of 21 points and 10 rebounds for the Bulls -- who are 27-14, despite having lost three in a row and four of their last five.
Zach LaVine and Lonzo Ball both were out with left knee injuries for the Bulls, as well as Alex Caruso (Health and Safety Protocols).
Boston led by as many as 12 points in the first half before taking a 54-49 advantage into the break and barely holding on 84-83 after the third quarter.
The Bulls grabbed their first lead of the night on a DeRozan 10-foot go head jumper to go up 92-91 with 8:37 left to play. There were four lead changes in the next four possessions until Coby White (19 points) and Dosunmu hit back-to-back 3-pointers to put Chicago up five.
DeRozan hit a 19-foot pullup jumper that put the Bulls up 112-106, which matched their largest lead of the game with 1:57 left. The Celtics went on an 8-0 run to end the period, including two made free throws from Robert Williams to tie it 112-112 with 31 seconds remaining. DeRozan missed a step back that led to a loose ball foul call on Vucevic, as Williams iced it with two more freebees.
Udoka spoke about Williams, who was 66% shooter from the charity stripe, and how he was a huge factor in hitting the game-winning free throws in the closing seconds.

"We wanted to attack all night, and obviously he's a rim threat," said Udoka of William's performance. "He was huge for us."

The Celtics will look to go above .500 when they host the New Orleans Pelicans (16-27) Monday afternoon. Tip-off on Martin Luther King Day is at 12:30 PM ET.