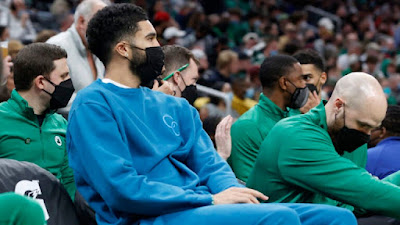 Jayson Tatum returned to practice Tuesday afternoon after being cleared from the NBA's Health and Safety Protocols, ahead of the Celtics hosting the San Antonio Spurs tonight.
The last time the All-Star forward battled COVID-19 during the 2020-21 campaign he had to use an inhaler for the rest season and into the summer. While Tatum said at Media Day back in September that he no longer needed to use the inhaler, there is still some cause for concern after his second bout with the virus less than a year later.

"Obviously I kind of reverted back to everything, and it kind of felt like the first go-round when I had it last year, and how tough that was and everything like that," Tatum said in his post-practice presser Tuesday. "But I feel a lot better with everything. My quarantine was shorter, my body feels a lot better, just comparing my first couple of days back working out and practicing than last year when I first came back.

With all the recent cases around the NBA during the month of December, Tatum was not all surprised or puzzled that he tested positive once again.

"All of the positive cases we've had in the league and with the guys on the team, obviously trying to stay as safe as possible but realizing there's always risk and a possibility," he said. "I don't think I was puzzled. I guess just kind of what we're dealing with right now."

After missing the last four games, including the Celtics overtime win over the Orlando Magic -- despite being cleared from league protocols on Sunday -- Tatum spoke about Jaylen Brown's 50-point performance, calling it impressive and much needed.

"We needed it," Tatum said. "Him playing the way he did, especially late, I think the team kind of fed off of it. We were down 14 with four minutes left, and just figuring out a way to win -- that was a big win for us."

According to head coach Ime Udoka, Tatum will not be on any minutes restriction when he gives Brown some assistance against the Spurs Wednesday night.

"He's had two or three extra sessions, and he's looking good out here with what he is doing so far," Udoka said in his post-practice comments. "He's the type of guy that wants to come back and get right back into his role and not be limited. Something he's stressed that he doesn't love is a minutes restriction and anything like that. As long as his conditioning and wind is fine, he can get right back to playing at the level that he was."

Aside from Tatum, Enes Freedom also returned to practice and has been cleared out of league health and safety protocols, along with Robert Williams -- who missed Sunday's OT win over the Magic due to a right big toe sprain -- after coming off his first career triple-double against the Phoenix Suns to wrap up the 2021 calendar year, is also back to give the frontcourt some depth.
But just as it seemed like the Celtics were on the cusp of being 100% fully healthy, Payton Pritchard was ruled out early Wednesday after entering into the NBA's Health and Safety Protocols. The second-year guard was taking advantage of consistent minutes recently and playing well. Two-Way contract signee Brodric Thomas is also out with low back pain.


The Celtics and tip-off against the Spurs at 7:30 PM, before they head to Madison Square Garden Thursday on a second night of a back-to-back, as TNT will have the national broadcast.
Joel Pavón
Follow @Joe1_CSP