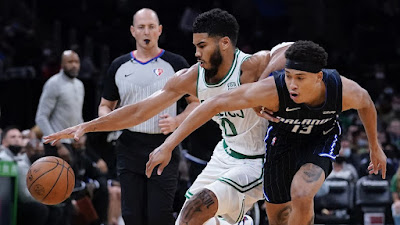 The Celtics could get a big boost to start the new year, as Jayson Tatum has cleared NBA's Health and Safety Protocols, per the team.
Following Boston's impressive New Year's Eve win over the Phoenix Suns, the Celtics All-Star forward has been listed as questionable ahead of Sunday's matchup at home against the Orlando Magic.


Tatum, who was named Eastern Conference Player of the Week just before being sidelined, missed three games and the Celtics went 1-2 in his absence.
Dennis Schröder has also cleared league protocols and is listed as questionable, while Robert Williams, who's coming off his first career triple-double, is questionable with a right toe sprain.
Enes Freedom and Aaron Nesmith remain in league COVID protocols, as the Celtics at 17-19 continue a 4-out-of-5 games home stretch at TD Garden with six weeks left until the NBA trade deadline.
Joel Pavón
Follow @Joe1_CSP