Jayson Tatum on his worst 3-point skid: 'I'm always the same person whether I miss 20 straight or score 51' 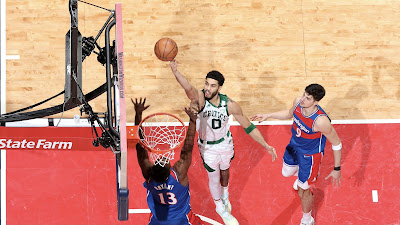 Jayson Tatum picked a perfect time to snap out of his career-worst 3-point slump, when he dropped a season-high 51 points in the Celtics' 116-87 blowout win over the Washington Wizards Sunday afternoon.
The All-Star forward entered the Capital One Arena having missed 20 straight from deep over the previous four games, before netting a career-best 9-of-14 from beyond the arc, as the Celtics fans in attendance cheered loudly after every made shot.
It didn't take long for Tatum to hit his first 3 in over seven days, when he connected at the 10:45 mark of the opening quarter and followed it up with another a few minutes later.

"The way to fix it, is you keep putting in the work and as a scorer, to see that first three go in, you get [the burden] off your back," Tatum said in his postgame presser Sunday. "Obviously when you get in that zone, there's nothing like it. You just keep going."

Tatum scored in a variety of ways throughout the game, recording 48 points just in the first three quarters alone to help the Celtics get back to .500 at 24-24 after losing two in a row. He also grabbed 10 rebounds and dished out seven assists -- coming up just short of a triple-double.
By halftime, Tatum had 30 points -- the most by any player in the NBA this season -- and was 6-of-7 from deep (nailing six straight before his first miss) before adding another 17 points in the third period.
While it appeared Tatum would most likely spend the final frame on the bench icing down his knees, despite being just two points away from reaching a 50-piece, another loud cheer from Celtics fans in the arena erupted again when C's coach Ime Udoka re-inserted his veteran wing with 7:21 left to play.
He registered his 50th point just moments later, and reached 51 on a made technical-foul free throw, which led to a standing ovation and chants of "M-V-P!"  from the same faithful Celtics fans once he was subbed out.
It was the third time in Tatum's young career that he scored 50 points in the regular season (fifth overall), something he attributes to staying confident, even when the shots aren't always falling.

"I wasn't discouraged or anything, shots I've been taking my whole life and I've scored 50 a handful of times and those times you're missing shots, you know what you're capable of," Tatum said. "Sometimes you've got to laugh it off. It's as simple as sometimes you don't make shots. The few phone calls I did get, people were making sure that I wasn't discouraged, that I wasn't down.
"I'm always the same person whether I miss 20 straight or score 51. Just on to the next one."

Marcus Smart also made his return against the Wizards, after missing the last six consecutive games due to a thigh injury and being in the NBA's Health and Safety Protocols. The veteran guard finished with 11 points, four rebounds, six assists and was a plus-36 in 31 minutes of action.
According to Tatum, Smart pulled him aside to give him a pep talk juts prior to tip-off.

"He told me not to worry about the 20 threes in a row that I missed, just to keep shooting," Tatum said. "They need me to be myself and they're going to fall and they did."

It was a much needed conversation, especially after Tatum was 0-of-7 from 3 -- including a potential game winner -- in Friday night's loss against the Portland Trail Blazers. The Celtics blew an 11-point fourth quarter lead and were outscored 20-5 in the final seven minutes.

"I told Jayson, 'I know you ain't hit a three in about 20 attempts. Just keep shooting. I'm going to make sure I find you, going to get you going, get you open," said Smart during his postgame comments. "Shoot the ball and don't think about it. Don't worry about anything else.'
"To be able to be part of this night is tremendous for us and for him and we’re proud of him. We need more of it."

Tatum was able to remain at ease about not making a 3 since Jan. 15 against the Chicago Bulls, bouncing back nicely in Washington D.C. as the Celtics also picked up the victory.

"We put him in a lot of actions and we got some favorable matchups," Udoka said to the media Sunday, "and so we kept going to him knowing he was in a good groove."

It was clearly Tatum's best performance of the season, something Udoka appreciates when it comes to the 23-year-old's talent and how far he can go.

"First thing is his consistency, and that’s in his approach, his preparation, his work ethic and everything he does every day," Udoka said. "When the shots aren't falling and he is getting the good looks, you aren't that worried about it, honestly. You're not as concerned with the slump, it's just playing the right way and he's doing that."

The Celtics will look to use some momentum Tuesday night when they host the visiting Sacramento Kings at TD Garden.
Joel Pavón
Follow @Joe1_CSP