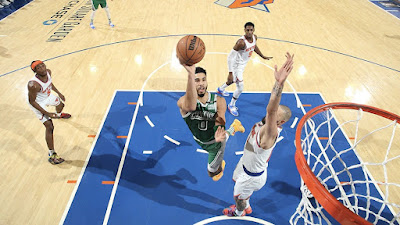 Another blown double-digit lead and another fourth quarter collapse for the Celtics Thursday night at Madison Square Garden, as they fell to the New York Knicks 108-105 on a RJ Barrett 3-pointer at the buzzer.
Despite 36 points on 12-of-21 shooting and 6-of-11 from deep -- to go along with nine assists -- from Jayson Tatum, who hit a jumper to tie the game with 1.5 seconds left to play, it was not enough to hold on for a win.
The Knicks final inbound pass landed in the hands of Barrett and he banked a 3 as time expired to give New York a much needed win and the Celtics their second straight loss to fall to 18-21 on the season.

"It wasn't about the last play again. It was everything leading up to it," C's coach Ime Udoka said. "We need some leadership. Somebody that can calm us down and not get rattled when everything starts to go a little south. I think it snowballs between our guys."

Dennis Schröder scored 20 points off the bench, while Jaylen Brown added 16 points and Marcus Smart chipped in 14 points for the Celtics -- who now trail the season series 2-1.
Evan Fournier continued his vendetta against Boston, recording a game-high 41 points on 10-of-14 from the 3-point arc. Julius Randle finished with 22 points and Immauel Quickley contributed with 16 points for the 19-20 Knicks.
Celtics were up 63-39 -- the largest led of the night with 1:16 left in the second quarter -- before New York used an 8-0 run to end the first half. Boston took a 63-47 advantage into the break.
The Knicks hit two quick 3s to open the third quarter and cut their deficit to 10 and the Celtics responded with an 8-0 run of their own that eventually re-established a 20-point advantage (81-61) with 5:33 left in the period.
Boston was outscored 16-3 the rest of the third and only had an 84-77 lead going into the final frame. The Celtics advantage was never any more than eight in the fourth, as Fournier tied it 96-96 with 4:04 remaining. The Knicks pulled in front for the first time on another 3 from Fournier (99-98) with 2:07 to go.
In the final two minutes there were two ties and three lead changes including a Tatum three-point play, a Mitchell Robinson alley oop and a Quickley driving floater to put the Knicks up 103-101 with 44.7 seconds left.
Schröder turned the ball over on the following Celtics' possession leading to 1-of-2 made free throws by Barrett with 18.8 seconds on the game clock. Smart hit two free throws and Randle went 1-for-2 from the charity stripe before Tatum sank an 18-footer to tie it 105-105, leaving 1.5 seconds left -- setting up the final Barrett game-winner.
The Knicks outscored Boston 61-42 in the second half and also shot 12-of-20 from 3-point territory in the last two quarters.

"We need someone to stay calm late," Udoka reiterated. "Not someone adding to it when things start to get sped up. At times it feels like everyone tries to do it on their own."

The Celtics play the backend of their home-and-home against the Knicks Saturday night at TD Garden, as they look to even the season series at two games apiece. NBATV has the tip-off at 7:30 PM ET.