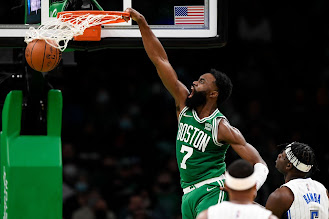 The Celtics rang in 2022 with a bang, after rallying from a 14-point fourth quarter deficit to beat the Orlando Magic 116-111 in overtime Sunday night at TD Garden.
Jaylen Brown shot 19-of-29 from the field, including hitting 5-of-10 from deep to set a new career-high of 50 points to go along with 11 rebounds, two blocks and a steal in 46 minutes.

"We needed to win. No way we could have lost this game. It wouldn't have been good," said Brown in his postgame presser, after going 9-of-12 to score 21 points to lead the fourth quarter comeback.

Brown, whose previous career-high was 46 in the season opener against the New York Knicks, hit a dagger 3 -- his fifth of the night -- with 1:29 left in overtime to give the Celtics their second straight win.
Dennis Schröder in his return from the NBA's Health and Safety Protocols, had 21 points and seven assists, while Marcus Smart added 17 points, seven rebounds and seven assists to help the C's improve to 18-19 on the year.

"We let the game come to us," Smart said to reporters after the game. "It wasn't pretty. It was a little ugly. But we came out with the win and that's because we kept our composure and we kept with it."

Terrence Ross led the Magic with 33 points on 11-of-19 shooting and 4-of-8 from 3 off the bench, while Garry Harris added 23 points and Wendell Jr. recorded a double-double of 15 points, 16 rebounds in Orlando's fifth straight loss to fall to 7-30 on the season.
Both teams were missing their leading scorer in Cole Anthony (sprained ankle) for the Magic and Boston's Jayson Tatum sat out for the fourth straight game, as he makes his way back from league COVID protocols. Robert Williams was also out with a toe sprain after notching his first career triple-double in a 123-108 win over the Phoenix Suns on New Year's Eve.
Despite committing 14 turnovers in the first half and being up by as many as 14, the Celtics barely led 45-42 at the break. Tim Frazier hit a three to tie it up at the start of the third, on his way to scoring 11 of his 14 in the quarter, before the Magic took their first lead and were also ahead by as many as 14.

"We got a little careless there. We were playing really fast and a little reckless at times and let them get back into the game, but overall we showed growth," Boston coach Ime Udoka said. "We've lost quite a few of those this year and got out there defensively and got what we wanted towards the end of the game."

The Celtics were outscored by Orlando 35-23 in the period, as Orlando used on a 20-4 run to take a 77-65 advantage into the final frame.
The Magic looked like they were very much in control following a Franz Wagner (14 points) layup to put them ahead 96-82 with 4:20 left in regulation. Boston would go on a 11-2 run to end the quarter, including back-to-back-to-back buckets by Brown to put the C's up 100-98 with 30.9 seconds remaining in the fourth before Frazier tied it up on the very next play that eventually sent it to overtime.
Schröder, who had struggled in the first half, knotted it up on a driving layup 102-102 and hit the go-ahead 3 to put the Celtics up for good on his way to eight points in the extra session -- including sinking three free throws in the final 15 seconds to ice the win in OT.
Afterwards Schröder was asked about how his body felt in his first game since being cleared from league protocols.

"I played 40 minutes. I was hurting, I'm not gonna lie," said Schroder in his postgame comments. "But I'm going to get treatment tonight, tomorrow, get a lift in and I'll be alright."

The Celtics will look to avenge a prior loss from a couple of months ago when they host the San Antonio Spurs (14-27) Wednesday night, before heading to New York to face the Knicks on a second night of a back-to-back.

Boston shot 45.3% from the field and 13-of-36 (36.1%) from behind the 3-point arc, while the Magic hit 42.6% from the floor and 9-of-27 (33.3%) from 3. The Celtics assisted 25 times on 39 baskets and Orlando had 17 dimes on 40 made shots. Both teams finished with 45 rebounds apiece, but the C's were outscored in the paint 54-48 and turned the ball over 22 times, with the Magic committing 17 turnovers.
Jaylen Brown became the seventh player in franchise history to reach 50 points and the fourth to achieve that feat while grabbing 10 or more rebounds in a game, joining Tatum, Larry Bird and Kevin McHale.
Joel Pavón
Follow @Joe1_CSP