Brad Stevens on current state of Celtics: 'We have a lot to fix' 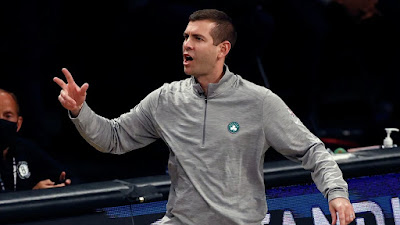 The Celtics' latest loss to the San Antonio Spurs was yet another example of how the 2021-22 season has gone so far, as they remain under .500 at 18-20
On the last play Wednesday night, Boston had an opportunity to tie the game after an inbound pass was picked off by Jaylen Brown at half court only to see the All-Star wing miss the layup in the final seconds that could have forced overtime as time expired.
Team president of basketball operations Brad Stevens made his weekly appearance on 98.5 Sports Hub's "Toucher and Rich" morning show to talk about how the Celtics continue to blow games in the fourth quarter.
Once again Stevens pointed to the lack consistency as he often has this season and Thursday morning was no different.

"When you're talking about winning a 48-minute game, you've got to be good throughout the whole thing, and you've got to find a consistent way of doing things well throughout the whole game," Stevens said on "Toucher and Rich". "Obviously, we've had some games here where we've had fourth-quarter opportunities and not finished…we have a lot to fix."

The Celtics were riding a two-game win streak heading into their matchup against the Spurs after impressive wins over the Phoenix Suns and the Orlando Magic at TD Garden to start the new year.

"Our lack of consistency possession to possession would be the No. 1 thing," said Stevens of the reason for the Celtics' sub .500 record.

Despite the return of Jayson Tatum and Brown scoring 30 points -- his third time in four games -- the Celtics trailed the entire fourth. Stevens dismissed that he would possibly break up the two young stars or even include Marcus Smart in any potential deals, but rather make internal changes such as switching up rotations instead.

"I think the challenge is that in the last two years specifically," Stevens explained, "There hasn't been a consistent timeframe to be able to evaluate the full group but the reality is we may never get that. I think we have enough information that we need to make sure we’re focused on improving.
"There's a couple different ways to do that. Number one is internally, tweaking what we're doing, playing better, tweaking rotations whatever the case would be and the second way would be roster tweaks. I think we would have to be -- I think everyone in here, players, coaches, front office, everybody that works here is not happy with where we are from a record standpoint, so we have to improve."

With the Celtics currently in tenth place in a deep Eastern Conference, the urgency is that much greater to execute to the roster's full potential.

"We have a lot of good players, guys that have done a lot of good things but so do the other teams," Stevens said. "Not everybody is equal in that regard but as you go down the line, especially in the East this year, it's just different. There's a different level of ability up and down than I've seen before."

Stevens has about a month to look at trade scenarios before the league's February 10th deadline, as the Celtics front office won't make a move just for the sake of shaking things up either.

"There's no question those need to improve," Stevens admitted. "There's a lot that needs to improve. We would like to get a chance to see everybody out there so we could get a real feel for the group in its totality but we also recognize that doesn't happen very often in the NBA and certainly doesn't happen in COVID years. We have to figure that out."

The Celtics play the New York Knicks Thursday on a second night of a back-to-back and the frontend of a home-and-home. TNT has the tip-off at 7:30 PM ET.
Joel Pavón
Follow @Joe1_CSP