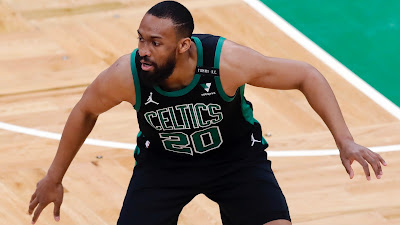 The Celtics have waived forward Jabari Parker, according to Shams Charania of The Athletic, who first broke to news.
The team officially announced the transaction Friday afternoon, which means that they'll have an open roster spot.

We have waived Jabari Parker.


Parker's $2.2 million contract would have been fully guaranteed if he wasn't waived by Friday evening. The veteran forward averaged 4.4 points on 47.4% shooting from the field, 50% from 3 and 100% from the free throw line, while grabbing 2.3 rebounds per contest in 12 games played this season.
His last big contribution was Christmas Day in the Celtics loss to the Milwaukee Bucks, as he put up nine points (2-of-4 from 3) and three rebounds in 12 minutes.
Per NBA salary consultant Yossi Gozlan, the move gives the Celtics more flexibility and gets them closer to being under the luxury tax threshold.

"They go from $6.2M over the luxury tax to $5.6M over, reducing their tax payment by $1.1M," Gozlan tweeted. "I would imagine they get below the luxury tax by the trade deadline."

With the Celtics at 18-21 following their 108-105 loss to the New York Knicks, their second straight defeat this week -- which puts them at 2-11 in games decided by five points or less -- they could potentially bring in another shooter or a veteran point guard, as the trade deadline is just over a month away.
Joel Pavón
Follow @Joe1_CSP