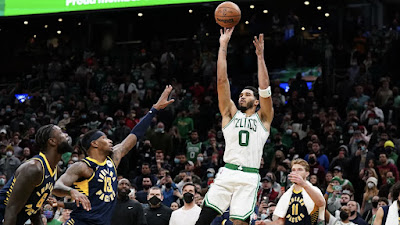 It wasn't pretty but the Celtics pulled out a 101-98 victory over the Indiana Pacers in overtime Monday night at TD Garden for their second straight win.
Jaylen Brown led the way with 26 points and 15 rebounds, while Jayson Tatum registered 24 points, including the jumper to send it to OT and hauled down 12 rebounds to help improve the Celtics to 20-21 at the midway point of the season.

"We stuck with them and ran them a little bit longer, but we knew the importance of this game," Boston coach Ime Udoka said of his two All-Stars in Brown and Tatum.

Robert Williams finished with 14 points, 12 rebounds, four steals and three blocks to give Boston its fourth win in six games. Marcus Smart added 11 points before leaving late in the third with a right thigh contusion.

"We stayed together through the end of the game," Williams said in his media presser. "We went through adversity, a couple of arguments within the team (during the game)...We've been challenging each other and stepping up to the challenge."

Torrey Craig led the Pacers with 19 points and Lance Stephenson scored 14 points both off the bench. Domantas Sabonis was held to 11 points on 3-of-12 shooting, but did record a triple-double with 23 rebounds and 11 assists for Indiana, who fell to 15-26 on the year.
The Pacers were also playing without Malcolm Brogdon (sore Achilles) and Caris LeVert (COVID protocols).
Both teams came into this frontend of a home-and-home series with 2-11 records apiece on games decided by five points or less.
The Celtics were down four with 45.6 seconds left in the fourth quarter after Justin Holiday (11 points) made a pair of free throws, but Robert Williams sank two of his own from the charity stripe before Tatum hit a fadeaway jumper to tie it 89-89 with 1.8 seconds left in regulation.
Holiday's contested shot from the right corner -- in front of the C's bench -- bounced off the rim as the clock expired, sending it to overtime.
Brown put the Celtics ahead 93-91 with a one-handed floater in the paint with 2:34 left in OT and Robert Williams blocked Osahae Brissett, which led to a Brown assist to Grant Williams -- who knocked down a corner 3 -- his only made shot of the night.
The Pacers made one last rally after cutting it to 98-95 and once again 101-98 after Tatum's two made free throws with 2.5 seconds left in OT, but Robert Williams picked off the desperation baseline inbound pass since neither team had any timeouts left to secure the win.

"We weren't as sharp as we wanted to be pretty much all game, but especially in the first and second quarter," said Celtics coach Ime Udoka postgame. "It wasn't even much pressure."

Despite the Celtics shooting a whopping 39.8% from the field, including 8-of-28 from 3 and committing 20 turnovers, Udoka was pleased with his team's performance in overtime.

"It shows some growth in the overtime and fourth quarter -- some of our sharpest execution," said Udoka. "We've been in enough of these close games to start seeing improvement as a positive."

Boston will travel to Indiana to face the Pacers on the backend of the home-and-home series Wednesday night.
Joel Pavón
Follow @Joe1_CSP