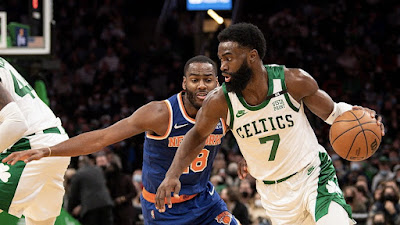 The Celtics not only got their revenge over the New York Knicks Saturday night, but they also didn't blow a double-digit lead in a much needed 99-75 win at TD Garden.
On a backend of a home-and-home, Jaylen Brown recorded his first ever triple-double with a state line of 22 points on 9-of-15 shooting and 2-of-4 from 3, to go along with 11 rebounds and a career-high 11 assists.
Boston bounced back from a 108-105 loss to the Knicks Thursday night, where they gave up a 25-point lead that set up a buzzer beating 3 in the final 1.5 seconds by RJ Barrett at Madison Square Garden.

"Any time you blow a lead like that, you're not going to forget it. We learned from that experience. That's all it is," Brown said in postgame presser.

Brown attributed his first career triple-double to that fact his teammates put in the extra work in practice and the film room.

"This was a game where some of that hard work paid off. Shout-out to the coaching staff," said Brown, who knew he was within range once he had 16 points, 11 assists and nine rebounds at the end of the third, but didn't want to focus on it.
"I wanted to just keep playing basketball. I'm not trying to stat chase. I'm not a guy that's trying to do that," Brown said. "It's definitely a milestone in my career to get the first one and I'm looking to get a lot more."

Jayson Tatum scored 19 points, while Josh Richardson added 17 off the bench and Robert Williams chipped in 12 points, four blocks for the Celtics -- who improved to 19-21 on the season.
The hero of the last meeting between the two teams, Barrett led the Knicks with 19 points and Immanuel Quikley added 18 points. Julius Randle struggled on 6-of-19 from the field, including going 1-of-8 from deep, but grabbed 12 points for New York.
The Knicks were without former Celtics guards Evan Fournier (left thigh contusion), who went off for a career-high 41 points on Thursday and Kemba Walker (sore knee), who missed his fifth straight game.
The Celtics trailed 26-21 after the first quarter and took a 44-42 advantage into halftime before they erupted in the third.
Boston opened up the second half with a 10-2 run and finished the period shooting 11-of-19, capped off by a Brown 3-pointer to give the C's a 76-60 lead heading into the final frame.
It was more of the same to start the fourth, as the Celtics hit back-to-back 3s (one by Richardson and the other by Tatum) that pushed the lead to 82-60 with 10:09 left to play.
The Knicks were held to just 15 points the rest of the way and Boston emptied their bench in the last 1:30 of the quarter.
Despite New York hitting 11-of-31 from behind the arc, they were 29-of-79 from the field and only 6-of-15 from the free throw line.

"We've done it half by half several times this year," said Boston's head coach Ime Udoka. "Tonight we put a full one together."