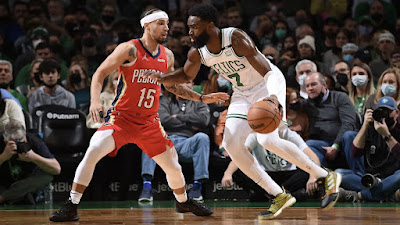 The Celtics erased an 18-point first half deficit to beat the New Orleans Pelicans 104-92 at TD Garden on Martin Luther King, Jr. Day.
Jayson Tatum scored 21 of his 27 points in the final two quarters, while Jaylen Brown addressed the crowd prior to a 12:30 matinee tip-off, to finish with 23 points and eight rebounds. Dennis Schröder also netted 23 points to go along with nine assists and Al Horford chipped in 12 points, seven assists.

"It was an early game and we didn't come out the right way," Schröder said in his postgame presser. "At halftime, it was keeping everybody accountable and saying: 'You've got to play with more energy.' I think that's what we did in the second half. We got easy buckets on the offensive end and shared the ball."

The Celtics, who were without Marcus Smart (Health and Safety Protocols) and Robert Williams (personal), improved to 15-8 at home and 23-22 overall, as they're above .500 for the first time since Dec. 7 -- winning five of their last six games.
Jonas Valanciunas led the Pelicans with 22 points, 14 rebounds and Herbert Jones added 16 points. Brandon Ingram also recorded a double-double of 15 points, 10 rebounds for New Orleans -- as they fell to 16-28 on the season.
Boston trailed 46-39 at the half before they used a 10-4 run to close out the third quarter and take their first lead of the game (71-69) entering the final frame following a Schröder 3.

"It looked like we woke up at halftime a little bit," C's coach Ime Udoka said. "Overall, the offense really woke up, playing with the pace we wanted to and taking care of the ball."

Tatum hit back-to-back jumpers to open up the fourth, forcing the Pelicans to call a timeout with 10:28 left to play. The Celtics continued to pour it on, as Tatum found a running Aaron Nesmith with a left handed skip pass following a steal to complete the fast-break baseline dunk -- that got the crowd on its feet -- got fouled and made the free throw as part of a 22-7 run.
Boston led by as many as 17 in the fourth quarter, outscoring the Pelicans 65-46 in the second half.

"It's nice to have hit a stretch where we've played well," said Udoka, "But we're going to keep grinding."