Jayson Tatum works out with Bradley Beal, other NBA players 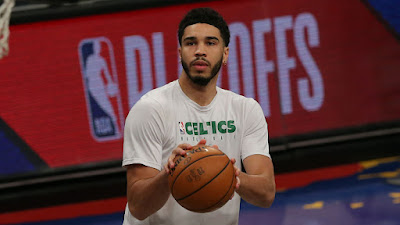 Jayson Tatum hasn't exactly been taking it easy during the offseason, especially after winning a gold medal at 2020 Tokyo Olympics this summer.
The Celtics All-Star has been seen clanking and banging, while also playing pickup ahead of his fifth NBA season. Pictures of a very bulked up Tatum have gone viral and it's clear the 23-year old has been putting in that work in the weight room.

Jayson Tatum, Bradley Beal and RJ Barrett going at it in summer workouts 💪

While rumors continue to tie best friends Tatum and Beal of possibly playing together in Boston, especially since the Wizards All-Star guard can opt out of his current deal next summer, the two have spent a lot of time with one another over the past few months.
Tatum however, looks to be adding more physicality to his game since he'll more than likely continue to see plenty of minutes at the power forward spot this upcoming season. Already a proven elite scorer, the Celtics star put up a career-high of 26.4 points per-contest during the 2020-21 campaign -- hitting the 50-point mark four times (including the play-in and playoffs) and the 60-point plateau once.
Joel Pavón
Follow @Joe1_CSP