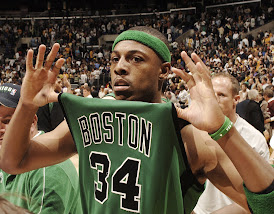 Celtics legend Paul Pierce is finally heading into the Naismith Basketball Hall of Fame Saturday in Springfield, MA.
After his first nine seasons in the NBA, all in Boston, Pierce became a household name as an All-Star while having some moderate success in the playoffs.
That all changed following the 2006-07 season in which Pierce averaged 25.0 points per contest before having to be shut down after 47 games with an injury. With the Celtics finishing with only 24 wins, Danny Ainge finally got 'The Truth' some help in the shape of a former league MVP in Kevin Garnett and sharp shooter Ray Allen.
Ahead of the Hall's class of 2021 ceremony, Pierce acknowledged that he was lucky to not only team up with two other future Hall of Fame talents, but win it all in just their first season together during the 2007-08 campaign.

"So all these things had to line up, whereas today guys manufacture playing with each other, building super teams through free agency, building friendships. And I have nothing against that. That's why I take so much pride in being with the team I was with so long, going through the tough times and finally being able to win a championship."

The Celtics new "Big-3" won 66 games on their way winning the franchise's 17th title. Garnett won Defensive Player of the Year, Allen fit into his role as the team's third scorer and Pierce remained the leader in route to beating his childhood Los Angeles Lakers in six games -- capturing Finals MVP in the process.
It took Pierce a decade to win that coveted championship ring, his first and only one in a 19-year playing career. Though the Celtics were favorites to repeat in 2009 (winning 62 games), a knee injury to Garnett resulted in a second-round exit and a Kendrick Perkins' torn ACL forced a Game 7 against the rival Lakers in the 2010 NBA Finals -- only to be minutes away from a second title in two years before coming short to Kobe Bryant.
While that second Finals appearance didn't seemed like it would be the last at the time, it was definitely the one that got away. Pierce would never get another opportunity to play for a championship for the rest of his career -- the one thing he regrets.

"The only regret I have is not winning that second one," Pierce said. "That's it."

One last deep playoff run ended in another Game 7 heartbreaking loss for Pierce at the hands of LeBron James and the Miami Heat during the 2012 Eastern Conference Finals. After Rajon Rondo tore an ACL midway through the very next season, Pierce as the 'point-forward' and the Celtics simply just ran out gas against the New York Knicks in the first-round. With a 3-0 deficit to try and climb out of, Boston pushed it to six, but it was too little too late as Pierce played his last game in a C's jersey.
In the summer of 2013 Pierce was traded along with Garnett to the Brooklyn Nets before signing with the Washington Wizards as a free agent a year later, as both seasons ended in second round knockouts. With his championship aspirations still alive, Pierce signed with the Los Angeles Clippers to reunite with coach Doc Rivers, but he would call it a career following the 2016-17 season and no second ring.
During his 15 years with the Celtics, Pierce was a 10-time All-Star, made an All-NBA team four times and finished as the franchise's second leading scorer behind John Havlicek.

"Joining the Celtics was a dream come true as a historian of the game," Pierce said. "To be a part of a tradition, I could not have asked for anything better. I am happy that I could create some history for one of the greatest's sports franchises ever."

The Basketball Hall of Fame class of 2021 ceremony will air on NBATV at 7 PM EST.
Joel Pavón
Follow @Joe1_CSP