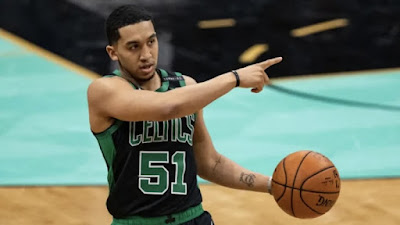 Former Celtics guard Tremont Waters has reportedly agreed to a deal with the Milwaukee Bucks Tuesday, according to Shams Charania of The Athletic.
After spending his first two seasons in Boston, Waters will compete for a roster spot with the Bucks come training camp at the end of the month, as Milwaukee has guaranteed and two-way slots open.

Guard Tremont Waters has agreed to a deal with the Milwaukee Bucks, sources tell @TheAthletic @Stadium. Waters will compete for a roster spot in training camp, with the Bucks having open guaranteed and two-way slots. He spent his first two NBA seasons with Celtics.

Waters, who was the 51st pick in the 2019 NBA Draft, was signed to a two-way deal with Boston before he won G-League rookie of the year honors in 2020 with the Maine Red Claws. The 5-foot-10 guard signed his second two-way deal just prior to beginning of the 2020-21 campaign, playing 26 games -- three of them were starts.
With the many changes to the Celtics backcourt depth this offseason, it was unlikely Tremont was going to have a bigger role than what he reportedly was seeking.
Waters averaged 3.8 points and 2.4 assists per contest last season, while shooting 39.5% from behind the 3-point range. He'll be joining former Celtics teammate Semi Ojeleye with the reigning league champs.
Joel Pavón
Follow @Joe1_CSP