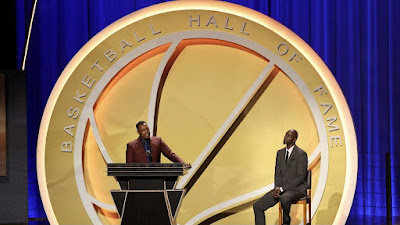 Paul Pierce was officially enshrined into the Naismith Memorial Basketball Hall of Fame Saturday night in Springfield, MA.
While the Celtics legend was proud to represent Boston for 15 years, Pierce during his speech couldn't help but thank the nine other franchises that didn't take that chance and passed on drafting him 22 years ago.

"Coming out of college, I was a first team All-American, a projected No. 2 pick," Pierce said. "I'd like to thank the Clippers, Vancouver Grizzlies, Denver Nuggets, Toronto Raptors, Golden State Warriors, Sacramento Kings, Philadelphia 76ers and Milwaukee Bucks, the nine teams that passed on me. Thank you for passing on me and adding fuel to my fire. I appreciate that."

For Pierce, who landed in the Celtics' lap as the No. 10 overall pick in the 1998 Draft, it's pretty safe to say it worked out pretty well for the Los Angeles native. But, for those that need a reminder of the first nine that were drafted ahead of Pierce, let's take a look below:
1. Clippers - Michael Olowokandi
2. Grizzlies - Mike Bibby
3. Nuggets - Raef LaFrentz
4. Raptors - Antwan Jamison
5. Warriors - Vince Carter
6. Bucks - Robert Traylor
7. Kings - Jason Williams
8. 76ers - Larry Hughes
9. Mavericks - Dirk Nowitzki
Pierce is in his 19-year career  become the Celtics' second-leading scorer in franchise history and 19th all-time in NBA scoring with 26,397 points. "The Truth" has his No. 34 retired by both the C's and Kansas and also led Boston to an an NBA Championship in 2008, before any of those drafted ahead of him in his draft class and is also the first of those 10 to reach the Hall of Fame so far.

"I'd like to thank Rick Pitino and Lester Conner for going out on a limb and drafting me," Pierce said during his speech. "To this day, I don't understand how I slipped to No. 10. I was in shape, my shot was falling, I was running the line drills. I was like, 'How did I slip to 10?' But everything happens for a reason."

Pierce also thanked Celtics ownership and Danny Ainge for being an instrumental part of his decade and a half in Boston.

"Danny Ainge, Wyc Grousbeck, Steve Pagliuca, thank you for believing in me," Pierce said. "I honestly thought Danny was going to trade me. He came in and was trading everybody. He traded Antoine, I was like, 'It’s over for me.' But ya'll stuck with me. We went through some tough times and I appreciate you. It took 10 years for you to bring [Kevin Garnett] around. I told you in 2006, if we get him, we are going to win it. We had arguments if I was going to go to Minnesota or if he was going to come to the Celtics. It worked out."

Doc Rivers, who coached Pierce for nine seasons in Boston, had high praise for the former Celtics captain.

"Paul completely understood what a Boston Celtic was and what it took," Rivers said during a montage dedicated to Pierce. "He wanted to be a Celtic and win a title as a Celtic. He accomplished that."

Though Pierce will always be known as one of the best to put on a Celtics' uniform, Saturday night also etched him in stone as one of the greatest basketball players ever.
Joel Pavón
Follow @Joe1_CSP