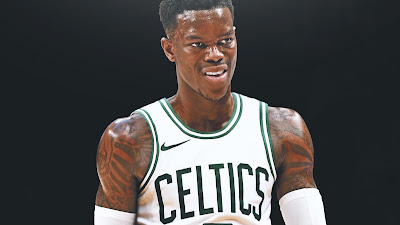 Dennis Schroder is seeking a new jersey number with the Celtics and he's asking fans to help him choose one before the start of training camp.
The veteran combo guard, who signed a one-year, $5.9 million deal last month, has worn No. 17 his entire career (Atlanta, Oklahoma City and Los Angeles) and the number is already retired in the TD Garden rafters -- worn by Celtics legend John Havlicek.
Schroder is letting fans vote on his new online App DS17 and he's narrowed down his choices to five numbers (8, 71, 80, 84, 96). The No. 96 is getting some love in Europe since the 27-year-old's favorite soccer club in Germany is Eintracht Braunschweig and their rivals are Hannover 96, so fans of the that team have been voting for No. 96.

"As you can probably imagine, coming from Braunschweig, number 96 is not necessarily my favorite number," Schroder wrote.

According to the app, voting will end on September 17 at 17:17 local German time to commemorate giving up his beloved No. 17 for the upcoming season.
While Schroder played as a starter last season with the Lakers, he's been very affective as a sixth man, something NBC Sports Boston's Chris Forsberg believes can work in the eight-year guard's favor if he embraces that role again.

"Schroder needs to recognize that the most obvious pathway to his next payday is helping the Celtics exceed expectations while embracing a team-first approach. Reports this offseason indicated that Anthony Davis and the Lakers were frustrated by Schroder's play last season with a suggestion that he too often stepped outside his point guard role. Schroder can erase that narrative and restore his free-agent value by simply channeling his OKC days."