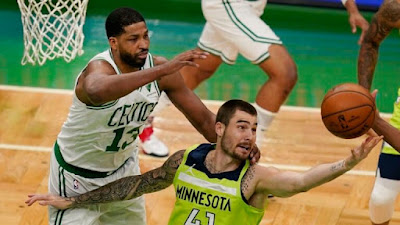 The Celtics reportedly have acquired forward Juancho Hernangomez from the Minnesota Timberwolves in exchange for guards Kris Dunn, Carsen Edwards and a 2026 second-round pick swap.
According to ESPN's Adrian Wojnarowski, the deal can't be completed until September 15 due to the contracts of Dunn and Edwards.
Hernangómez, who gives the Celtics some added depth in the frontcourt off the bench, is a 6-foot-9 power forward from Madrid, Spain. The former No. 15 overall in the 2016 NBA Draft has a career average of 5.7 points and 3.5 rebounds over his five-years in the league, including putting 12.9 points and 7.3 rebounds in 14 games with the Timberwolves in 2019-20. His numbers dropped to 7.2 and 3.9 in 52 games last season, which he missed 20 days due to being in Health and Safety protocol.
Dunn is on the move again, heading to his second team this offseason, as he would have likely been the third or possibly the fourth point guard on this current Celtics' roster. The former Providence College guard could see an increased role in Minnesota – where he was drafted as the No. 5 overall pick in 2016.
Edwards, a 5-foot-11 guard out of Purdue University, never played consistent minutes in his two years with the Celtics. Despite being known as a streaky shooter, he hit only 30.2% of his attempts from the field.
With this move, the Celtics are back to a 15-man roster and it's possible there are more changes to come. For now the depth chart is as follows:
Guards - Marcus Smart, Dennis Schröder, Josh Richardson, Payton Pritchard, and Romeo Langford
Forwards - Jayson Tatum, Jaylen Brown, Aaron Nesmith, Hernangómez, Grant Williams, Jabari Parker, and Sam Hauser (two-way)
Bigs - Robert Williams, Al Horford, Enes Kanter, and Bruno Fernando
Joel Pavón
Follow @Joe1_CSP