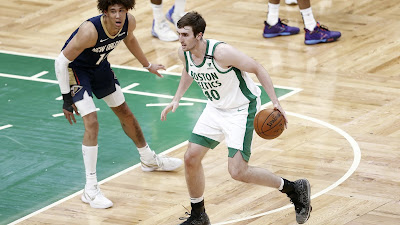 Luke Kornet has reportedly signed an Exhibit 10 deal with the Celtics Wednesday, according to Chris Grenham of Forbes Sports.
The 7-foot-2 center returns, but this time to the training camp roster, following playing behind Tristan Thompson and Robert Williams III last season. Kornet played meaningful minutes, especially when the two big men where out due to injury or COVID health and safety protocol.

The Celtics have agreed to an Exhibit 10 deal with Luke Kornet, per sources.

Kornet, who was traded from the Chicago Bulls at the deadline in exchange for Daniel Theis, becomes the second of the Celtics training camp invites after forward Juwan Moragn -- last played for the Utah Jazz -- was added just hours prior. With an already crowded Boston frontcourt of Al Horford, Bruno Fernando, Enes Kanter Jabari Parker, Grant Williams, Robert Williams and newly acquired Juancho Hernangomez, it's likely Kornet will end up in Maine.
In 18 games played (two starts) with the Celtics during the 2020-21 campaign, Kornet averaged 4.4 points, 2.9 rebounds and 1.4 blocks in 14.1 minutes per contest, while shooting 47.3% from the field.
The path towards NBA minutes will be a tough one for Kornet.  He’ll get plenty of run in the G-League and could even grab the last open two-way slot alongside undrafted forward Sam Hauser.
Though Celtics president of basketball operations Brad Stevens says the team will probably wait until after training camp -- which kicks off on September 28 -- before making a final decision on who fills that last two-way spot.
Joel Pavón
Follow @Joe1_CSP