Al Horford on his Celtics return: 'Happy to be back in Boston' 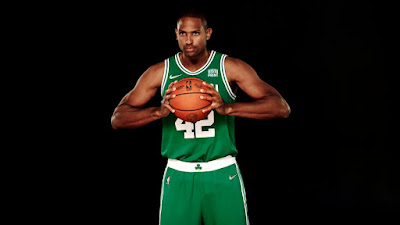 It already seems so long ago that Brad Stevens traded Kemba Walker for Al Horford as his first major move as the Celtics president of basketball operations to kick off the summer.
Several months later, the 14-year veteran donned the green and white once again at the team's Media Day where Horford couldn't stop smiling while telling reporters "Its a bigger appreciation," when asked about how he felt to be back with the Celtics after being in Philadelphia and Oklahoma City the last two years.

"I'm so happy to be back in Boston," Horford said on Monday. "I appreciate even more what it means to be a Celtic and represent Boston. Looking at the group we have here, I'm even more excited."

It was back in 2016 when Horford signed with the Celtics, making him the first All-Star the team had acquired via free agency during the post 'New Big-3' era. The roster at the time included Isaiah Thomas, Avery Bradley and Jae Crowder before the arrival of Kyrie Irving, Gordon Hayward and Marcus Morris a year later.
During his three seasons in Boston, Horford helped the Celtics make two consecutive trips to the Eastern Conference Finals and following the infamous 2018-19 campaign that ended in a disaster, 'Big Al' took his talents to the 76ers -- signing a four-year, $109 million deal.
Horford, unfortunately, never quite fit with Joel Embiid and Ben Simmons, something that new Celtics head coach Ime Udoka, who was an assistant in Philly, spoke about and also on what to expect from the big man this upcoming season.

"We had a big lineup in Philadelphia," Udoka explained during his Media Day presser. "He worked well off of Joel Embiid. He is obviously a cerebral player who can pass the ball, shoot the ball, do some things on the perimeter, and take advantage of mismatches. Most teams only have one big out there, and for the most part, that would usually be on Joel.
What didn't work well was us putting him in the best position in Philadelphia to take advantage of some of the mismatches he had. But we're looking at some different things with Al. He's so versatile, and he kind of got back to who he was in Oklahoma City last year to some extent. He's looked great in the gym and is in tremendous shape."

During his three years in Boston, Horford averaged 13.5 points, 7.0 rebounds, and 4.6 assists per contest. Since then, those numbers slightly fell to 12.6 points, 6.8 rebounds, and 3.8 assists over the past two seasons, which included a brief stint with the Thunder -- playing only 28 games after being shut down following the 2021 trade deadline.
At 35-years old, Horford returns to a roster full of familiar faces he's played alongside during his career, such as Josh Richardson, Dennis Schroder, and of course Celtics All-Stars Jayson Tatum and Jaylen Brown.

"I had a great time in Atlanta with Al," said Schroder during his Media Day presser. "He's a great guy; his family, just being around him and his mentality, his chemistry with all the teammates in the locker room, is important for me as well. I knew when I was coming here, Al Horford has got the locker room under control. To be in that environment and to play with him again -- I'm excited."

Robert Williams III is also content to have Horford back in the fold, as the young Celtics big credits the popular veteran for being a very crucial piece to his development as a professional.

"I was just talking to Al and EK [Enes Kanter], and they're some of the biggest influences on how my life has been going in this game, on and off the court," said Williams during his Media Day presser. "With Al, watching him as a family man and taking it to the professional side. And Enes, watching some of the things he does, making 30 rebounds, it's just great energy and always positivity."

Horford's versatility and leadership will definitely take some of the load off of the shoulders of Tatum and Brown, who at times last season lacked the ability to trust their teammates. 'The Godfather' not only makes the Celtics roster a deeper one but also more experienced, something that was very much missed over the last two years with Stevens at the helm.
Joel Pavón
Follow @Joe1_CSP