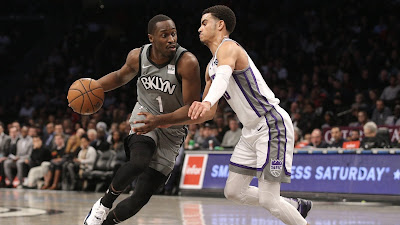 The Celtics are reportedly signing guard Theo Pinson to their training camp roster, according to ESPN's Adrian Wojnarowski.
Pinson, a three-year NBA veteran, played for the Brooklyn Nets in his first two seasons and spent last year with the New York Knicks on a Two-Way deal. In 68 games, he's averaged 2.9 points in nine minutes per contest.


In two years with the Long Island Nets of the G-League, Pinson played everyday minutes while averaging 19.6 points, 6.1 rebounds and 5.9 assists in 43 games -- all starts.
At 6-foot-5, Pinson faces a tough battle to make the final roster, as the Celtics have plenty of depth at the wing position already. With Pinson having one more year of Two-Way eligibility left, it's possible his deal could be converted by the end of training camp or he simply plays for the Maine Celtics as an Affiliate Player.
Either way, the Celtics are up to 19 players on their training camp roster with one more spot left before next week.
Joel Pavón
Follow @Joe1_CSP