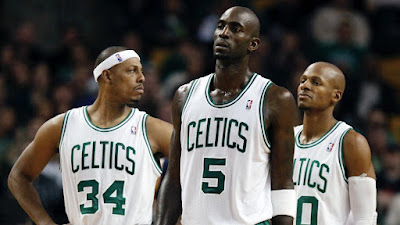 It's been at least seven years since the Celtics former "Big-3" of Paul Pierce, Kevin Garnett and Ray Allen were in the same room.
As "The Truth" is on the verge of being enshrined into the Naismith Basketball Hall of Fame this weekend, the Boston legend spoke about a variety of topics with Chris Mannix of Sports Illustrated. Pierce reflected on a 19-year NBA career and even on his abrupt exit from ESPN.
While Pierce is proud of winning a championship and bringing a 17th NBA title to Boston in 2008, it's still his hope that one day that much of his teammates from that roster will reunite. For those that don't remember, a Celtics feud exists due to Allen taking his talents to the then rival Miami Heat in the summer of 2012 and winning a championship.
Though Pierce and Allen have made up since, the Celtics legend still envisions the starting five of that championship team including KG, Rajon Rondo and Kendrick Perkins walking out during a game at halftime to a roaring TD Garden crowd in some sort of celebration.
Pierce believes that Garnett is softening as time goes on, despite there being no mention of Ray-Ray during his Hall of Fame speech this past May.

"KG, he's less stubborn as he gets older," Pierce said via Mannix of SI.

But when it comes to Rondo, the jury is still out on whether he'll burry the hatchet with Allen anytime soon. The two All-Star guards have never exchanged anything other than jabs to one another through the media, especially following the release of Allen's tell-all book in 2018.

Former Celtics coach Doc Rivers said he tried to get the band back together last year, but had no success. As for Pierce, he's determined not to fail in getting his brothers to reconnect.

"I'm going to keep talking to everyone," says Pierce. "What a moment that would be."

In the meantime, Pierce will be presented by Garnett come this Saturday in Springfield, MA, along with fellow inductee Chris Bosh -- who's going to be presented by none other than Allen. With Bill Russell also scheduled to be in attendance and inducted (as a coach), there wouldn't be a better time to end a feud between former Celtics players other than this one -- the spotlight will clearly be on them.
The Basketball Hall of Fame class of 2021 enshrinement ceremony is set to take place on September 11.
Joel Pavón
Follow @Joe1_CSP