Paul Pierce opens up about ESPN divorce: 'You have to talk about LeBron all the time' 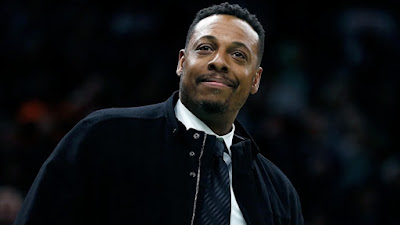 As former NBA star Paul Pierce awaits his induction into the Naismith Basketball Hall of Fame class of 2021 this weekend in Springfield, MA, the Celtics legend had a few choice words about his divorce from ESPN.
In a recent interview with Chris Mannix of Sports Illustrated, "The Truth" broke his silence about the abrupt split with the four-letter network.

"I was done with them, anyway," Pierce said via Mannix's piece. "It wasn't a great fit. There's a lot of stuff over there you can't say. And you have to talk about LeBron all the time."

It was back in April when Pierce went live on Instagram -- which he thought only a "couple of hundred people" would see -- and had not realized the stream could be recorded, let alone go viral. The 2008 Finals MVP was hanging out with some friends drinking, smoking and playing poker while strippers could also be seen dancing and giving massages.
For ESPN, who didn't ask for an apology, it was the last straw in the relationship with Pierce that had been somewhat strained over the past two years due to the 10-time All-Star not wanting to travel and the network executives thinking he wasn't working hard enough, among other factors.
Still, according to Pierce, his longtime agent Jeff Schwartz suggested that he should make a statement and apologize anyway for the sake of the Hall of Fame voters that could be influenced by the video that cost him his job as a basketball analyst.

"Come on, I didn't do anything illegal," Pierce said via Sports Illustrated. "These motherf-----s in the Hall of Fame, some did [cocaine], f---ing battery. What the f--- did I do? I was just having a good time. All the people coming after me, half you motherf-----s do the same s---. You're just hiding it. And you all are married while you're doing it. I'm divorced. I'm retired. I'm having fun."

Though Schwartz wanted to be on the safe side when it came to the timing of the video possibly tarnishing Pierce's legacy on the court and not becoming a first ballot Hall of Famer, the Celtics' second all-time scorer in franchise history would have had a clear gripe.

"Listen," said Pierce, "if I didn't make it with this class, it would be the biggest stiff job in Hall of Fame history."

That's would be a tough pill to swallow since Pierce is in fact headlining this year's Basketball Hall of Fame ceremony that is scheduled to take place on Saturday, September 11. His best friend and former Celtics and Nets teammate Kevin Garnett (class of 2020) is set to present Pierce.

"It's hard to be a kid and say, 'I want to make the Hall of Fame," Pierce said. "I think all the players who make it play like they are going to go out and go as hard as they can, and the results at the end of the day, that's what your career is."

Other inductees include Bill Russell as a coach, Chris Webber, Ben Wallace, Toni Kukoc and Chris Bosh, who will be presented by another one of Pierce's former teammates -- Ray Allen.
Joel Pavón
Follow @Joe1_CSP