Jayson Tatum speaks on how adding muscle will impact his game 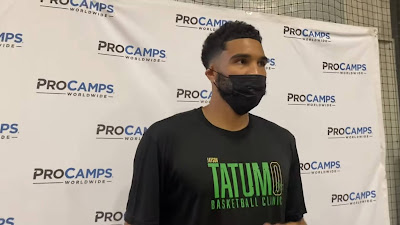 Jayson Tatum has had a busy summer improving on his game which also included adding more muscle.
The Celtics All-Star had noticeably looked bigger, as it was only about 10 days ago when images of a bulked-up Tatum working out had gone viral.
While hosting a youth basketball camp in Foxboro, MA over the weekend, the 23-year old forward was naturally asked if putting on some muscle would impact his game.

"Yeah, that definitely helps," Tatum responded Saturday afternoon. "I know people want to see me go to the basket more. I like some step-back jumpers. It's compromise. I'll do what the people want."

Tatum is heading into his first season under Celtics new head coach Ime Udoka, who's more than likely already been some sort of influence on the young star getting to the rim more rather than settling for mid-range jumpers.
Despite Tatum proving he can score on both drives to the basket and outside shots after averaging a career-high 26.4 points per game last season on 45.9% shooting and finished a career-best 68% of his attempts at the rim, he only went to the free throw line 5.6 times a night.
If Tatum can use the extra strength he's put on to make his way into the paint often than he already does, his free throw average will definitely go up and there's no limit how much more of lethal scorer he'll become this season.
The Celtics kick-off their training camp on September 28, with the preseason set to begin on October 4.
Joel Pavón
Follow @Joe1_CSP