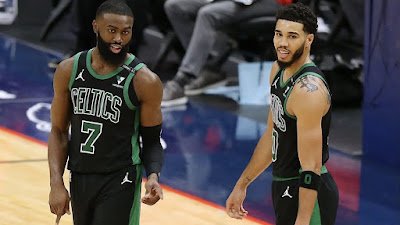 With all the changes this summer for not only the Celtics roster, but also the coaching staff and front office, ESPN projects that Boston won't be that much better than they were a season ago.
In their latest predictions, the four-letter network picked the C's to finish sixth in an improved Eastern Conference with an 45-37 record -- which is only a four-game improvement from the 2020-21 campaign.
The Celtics are slotted behind the Atlanta Hawks at No.5 and in front of the New York Knicks at No. 7, with the two clear contenders in the Brooklyn Nets and the current reigning champion Milwaukee Bucks at the top.

"The Celtics, after being one of the most stable organizations in the league for years, come into this season dealing with all sorts of changes," ESPN's Tim Bontemps writes. "Danny Ainge left his longtime post as vice president of basketball operations -- only for Brad Stevens to leave the sidelines and replace him."

Here are the rest of playoff teams could shape out, according to ESPN:
1.  Nets: 58-24
2.  Bucks: 57-25
3.  76ers: 50-32
4.  Heat: 49-33
5.  Hawks: 47-35
6.  Celtics: 45-37
7.  Knicks: 44-38
8.  Hornets: 40-42
9.  Bulls: 40-42
10. Pacers: 40-42
While Bontemps noted that the Celtics added depth in the backcourt with veterans Josh Richardson and Dennis Schorder -- something they needed last season -- old friend Al Horford also strengthens their frontcourt as well. If the roster can stay somewhat healthy this year, Boston can be a much better team without solely having to rely on All-Star Jayson Tatum to carry the offensive load only to run out of gas come playoff time.
The East has gotten better and though it's still unknown what will come of Ben Simmons reportedly wanting out of Philly, the Heat, Hawks and Hornets can also make a playoff run while playing disruptors in the process.
Despite the Celtics seemingly having their eyes set on the next offseason with players such as Zach LaVine and Bradley Beal could become available via sign-and-trade, expect new coach Ime Udoka to be an important piece towards building a future for the Celtics to become contenders sooner rather than later.
Joel Pavón
Follow @Joe1_CSP