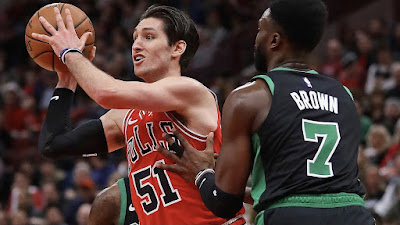 Free agent guard Ryan Arcidiacono has agreed to a training camp deal with the Boston Celtics, sources tell @TheAthletic @Stadium. Arcidiacono, who spent his first four NBA seasons in Chicago, worked out for the Warriors this week.


Arcidiacono has spent the last four season in Chicago, where he averaged 4.8 points in 17.6 minutes per game. His best year as a pro came during the 2018-19 campaign, as he put up 6.7 points in 24.2 minutes per contest and started 32 of 81 games played. The four-year guard is coming off a down year, appearing in only 44 games and was in and out of the Bulls regular rotations due to heavy guard depth on the roster.
While he did workout with the Golden State Warriors just days ago, he agreed on a deal with the Celtics.
Arcidiacono also spent some time in the G-League with the Austin Spurs (2016-17) and the Windy City Bulls (2017-18), appearing in 84 games over two seasons and averaging 9.8 points per contest. It's more than likely he'll return to the developmental league, but this time with the Maine Celtics.
Joel Pavón
Follow @Joe1_CSP