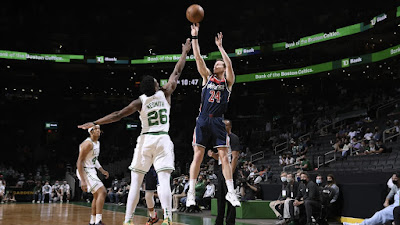 The Celtics have reportedly signed free agent swingman Garrison Matthews to a one-year, non-guaranteed deal, per Shams Charania of The Athletic.
The former 2019 undrafted Lipscomb University product appeared in 82 games for the Washington Wizards over the past two seasons. Matthews played 64 games last year (16 starts) and hit 38.4% of his 3-point attempts.
Matthews' contract allows him to have two-way privileges, which means he can bounce back and forth between the G-League and NBA this season.

While the Celtics have reached the max of 20 players on their training camp roster after adding Ryan Arcidiacono just days ago, it's likely Luke Kornet, who recently signed an Exhibit-10 deal, may be on his way out.
Boston's Media Day is scheduled for Monday, September 27 and training camp gets underway on Tuesday, September 28.
Joel Pavón
Follow @Joe1_CSP