Jaylen Brown on Black coaching candidates: 'They deserve to have a seat at the table' 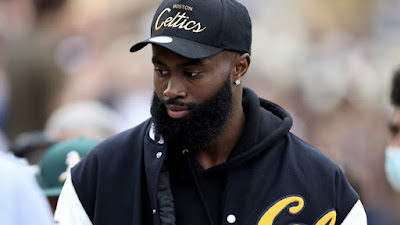 Jaylen Brown continues to push for systemic change, whether it means leading protests or speaking out against racial injustice and of course that also means better representation in the NBA.
Earlier this week, the Celtics All-Star spoke to Marc Spears of The Undefeated about how thrilled he is to see so many Black and other minority coaches around the league, as the 2021-22 season is set to tip-off next month.

"Whether it was because they were just trying to shut us up, or because they actually believed it was the right thing to do, it don't matter to me. That representation is important," Brown told Spears. "And that's giving people access and resources that they need and deserve to have, especially former players. They deserve to have a seat at the table too, especially in coaching positions, as well as in-office positions, ownership positions."

According to Spears, the 13 Black NBA coaches who will start this season is the highest for the league since the beginning of the 2012-13 campaign. While that's nearly half of the NBA's 30 teams that have hired a Black head coach, still players like Brown, Jerami Grant and others have become more vocal about wanting to see more coaches of color getting opportunities.
Following Brad Stevens succeeding the retired Danny Ainge as the Celtics president of basketball operations, Brown has been impressed with the Celtics offseason hiring of a Black head coach in Ime Udoka -- a former NBA player and veteran coach, who was more than qualified for the job.

"People may disagree, like, 'They're not qualified. They're just getting the job because they're African American.' You've seen people say that in the media," said Brown. "That's some [expletive]. There's plenty of qualified African Americans and Black people than can do their job. And they deserve to have a seat at the table."

The 24-year old Celtics guard also discussed the work he's doing to impact the communities in Boston which include a fellowship called "The Bridge Program," in partnership with MIT and Harvard for low-income students in Boston Public Schools that want to pursue higher education in STEAM (science, technology, engineering, arts and math). What's the lone requirement for the program?

"I wanted kids that want to change the world," said Brown.

This is just another prime example of how professional athletes such as basketball players can use their platform to affect change on and off the court.

"Athletes, we have a lot of influence on the next generation," he said. "So, instead of encouraging the culture to just dismiss our responsibility, like they try to do. They try to encourage us, 'No, you just need to focus on basketball. Oh, you just need to focus on this, go get some cars and some clothes, and some money and forget about everything to do with your community.' But I disagree. Just because I escaped some of the barriers that society has put up and reached a certain level of success doesn't mean I'm going to not care about the community that I come from."