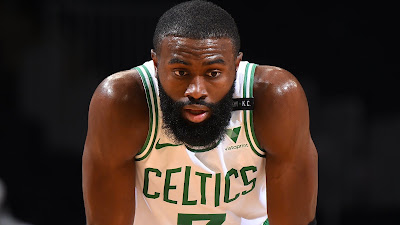 After a 7-3 start to the young NBA season, the Celtics will drastically look a lot different for the next 10-14 days, due to COVID-19.
Aside from All-Star Jayson Tatum and big man Robert Williams III reportedly testing positive for the coronavirus, forcing Tristan Thompson and Grant Williams into quarantine for the next week as of Friday. Now the team will officially be without guard Jaylen Brown and forwards Semi Ojeleye and Javonte Green as well after being place in the league's safety and health protocol on Sunday, according to the Celtics' injury report.

The Celtics, who face the Heat at TD Garden Sunday, will be without nine players (two are injured) while only having eight available to suit up -- just enough for the game not to be postponed -- according to league rules.

Jayson Tatum tested positive for COVID yesterday morning. Based on today's injury report, looks like it wasn't a false positive.


With Kemba Walker (knee) and Romeo Langford (wrist) already out since the start of the season, this would leave the depth chart quite thin for coach Brad Stevens. This leaves Marcus Smart as the Celtics' best player, with a supporting cast that includes Jeff Teague, Payton Pritchard, Tremont Waters, Carsen Edwards, Tacko Fall, Daniel Theis, and Aaron Nesmith.
While Thompson and Grant Williams are expected back sometime this week, the Celtics' frontcourt is about to take a serious hit for at least the next three games. Walker is reportedly set to return sooner than later from his knee rehab as well.
The "Hospital Celtics" host the Miami Heat tonight, with a 7 pm EST tip-off on NBA TV.
In the meantime, take a look at the NBA's safety and health protocol below:
• Occurrence of independent cases (not spread among players or staff), or a small or "expected number" of COVID-19 cases will not require a decision to suspend or cancel the season.
• Anyone who tests positive will have two routes to return to work: go 10 days or more after the first positive test or onset of symptoms, or test negative twice at least 24 hours apart via PCR testing.
• Any player who tests positive, even if asymptomatic, will not be allowed to exercise for a minimum of 10 days and then must be monitored in individual workouts for an additional two days.
Joel Pavón
Follow @Joe1_CSP