Jayson Tatum will not play Friday vs 76ers 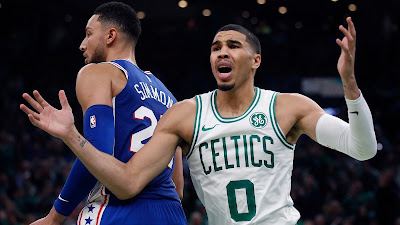 Jayson Tatum trained at the Celtics practice facility on Thursday, while his teammates remain in Philadelphia and set to face the 76ers in the back end of their two-game set.
Tatum will not play against the Sixers tonight, as he returns from COVID-19. The Celtics updated their injury report and the All-Star forward is listed as "out" for the fourth straight game.

#NEBHInjuryReport for tomorrow vs. Philadelphia:

With Tatum having a workout at the Auerbach Center, that should be an indication that he's passed the NBA's cardiac testing, just like Robert Williams III did earlier this week. The league is making sure players' hearts are not affected following a recovery from COVID.

"The cardiac screening has to be done before you enter the gym and before you can do anything," said coach Brad Stevens. "I would never want to put somebody out there who hasn't gone through that. Then the minutes restriction is then decided by ... how many minutes were they playing prior to and what was their activity level during the 14 days, which is usually none."

While Robert Williams was cleared to return in Wednesday's loss to the 76ers, the Celtics big man did not play as he was set to begin with a 8-10 minute restriction following his COVID two week layoff. Stevens opted to stick with Tristan Thompson and Daniel Theis playing the majority of the minutes at center. Kemba Walker (knee) will see his limit increase to 25-28 minutes on tonight after a strong showing two nights ago.
Rookie Aaron Nesmith is listed as "questionable" with back spasms, while Carsen Edwards remains in the COVID protocol with no timetable on his return. Romeo Langford (wrist) is with the team in Philadelphia, but is only putting up shots during pregame.
Tatum, who continues to work on his conditioning without the strain of traveling, is likely to return on Sunday when the Celtics host the Cleveland Cavaliers at TD Garden. Boston will head out on the road beginning in Chicago and San Antonio, before they start their west coat trip on Friday.
Stevens knows that due to travel, condensed schedules, COVID, cancelled practices and injuries have made the start of the season a difficult one. The Celtics coach also mentioned that Tristan Thompson remains behind schedule after missing all of training camp with a hamstring injury.

"Everybody's in the same boat. Everybody has to maximize film sessions, walkthroughs, hotel and zoom sessions, and whatever the case may be," Stevens said. "Those guys, it's just making sure they get back from injury and making sure they're getting enough reps, because you don't practice a lot right now, but that's part of it. You never do during the regular season."