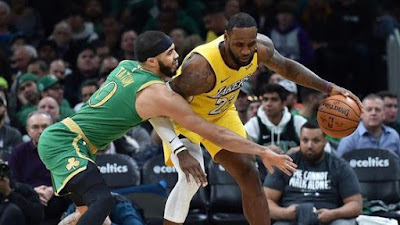 The biggest rivalry in the NBA is set to add another chapter to their history tonight, yet it will be the quietest one on record.
The Celtics will host the champion Los Angeles Lakers at the TD Garden and while it would normally be a sold out event well in advance, the Saturday night primetime matchup will have zero fans in attendance due to an ongoing global pandemic.
Superstar LeBron James, who knows all too well about what type of energy the fans bring when it comes to his own personal rivalry with the city of Boston throughout a career that spans 18 and counting, believes it won't be the same taking when he takes the parquet.

"Without the Boston fans, without the Laker faithful, it's not the same," James told reporters Friday. "It won't feel the same on Saturday. It's gonna feel great to play another game and play against a very good team, but it won't have the rivalry feel. The fans are so much a part of that rivalry. You can just listen, and go back and watch those games, how key those fans were in all those battles."

While the lack of fans may take away some of the luster for those that root for either team, this is still an important matchup for two of the best rosters in the league and could easily be considered an NBA Finals preview.
Celtics coach Brad Stevens knows the significance of this matchup and also what it means to be a part of an historic rivalry.

"You always have to remind yourself what you at eight years old would have thought, right? What you at 15 years old would have thought – and I've said that before when we're getting ready to play the Lakers to our team," Stevens said on Friday. "If you're concerned about your role in this game, if you're concerned about how many minutes you play or when you might be going in, don't forget about that 15-year-old that would have died to be on the end of the bench. This is a special opportunity, this is a special rivalry. Obviously, the opportunity to compete against the very best is always a great challenge and they're excellent."

"It's gonna feel great to play another game and play against a very good team, but it won't have the rivalry feel," Stevens added.

Despite the Lakers currently being on a two-game losing streak, they have a 14-6 overall record and James -- at age 36 is not showing any signs of slowing downs with or without fans in the stands. The former league MVP is averaging 25.5 points, 7.8 rebounds and 7.5 assists per-game and is shooting a career-high 41.7% from behind the arc.
Stevens spoke highly of James and his Hall-of-Fame career that has spanned nearly two decades.

"He is as special as special gets and he would be a multiple-time more MVP award winner if people weren't bored and looking for other things to discuss," Stevens said. "He's been the best player in the league for however many years now. He's an amazing offensive player, his ability to pass, drive downhill, shooting the career-high percentage from three, just keeps getting better and better and better and then obviously he's, physically, what you would want in a defender, right?
"He's got great size, he can guard one through five, he's super smart, he knows what's coming before it happens. Nothing but the utmost respect for him. Never had anything but. We've all had some playoff series that were pretty one-sided against him and one that went down to the wire and I just think it just makes you appreciate him even more as the years go on. And I think that he's played as well in some ways in the last year and a half, as I've seen him play."

Celtics All-Star Kemba Walker has been one of James' many victims over the years, as he has a 1-29 record in head-to-head matchups -- winning his first against him last season with the Celtics, snapping a lifetime losing streak of 28 consecutive games.

"Man, LeBron is a different breed," Walker told reporters Friday. "He's incredible and it's inspiring, for the most part to see someone who just takes care of his body, takes care of himself, every year proves the doubters wrong. Always so much pressure on that man and he always comes through, regardless of what’s said about him. He's a really inspiring person in our world. He's someone that everyone looks up to and wishes to be like. He's a special talent."

The Celtics at 10-7 following their 110-106 loss to the Spurs on Wednesday, look to add something to the rivalry against Los Angeles, especially since it'll only be the second time that Jaylen Brown, Jayson Tatum and Walker will have played together this season.
Walker returned to the lineup on January 17, after missing the first 11 games of the season rehabbing from a knee injury and doesn't want Brown (averaging 27.1 points) or Tatum (averaging 26.5 points) to worry about trying to adjust to him but rather it be the opposite as the year goes on.