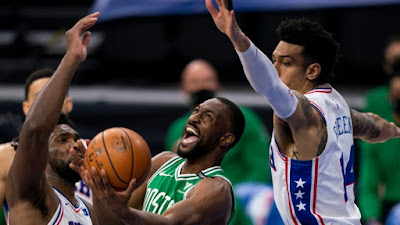 It was a battle for the best record in Eastern Conference on Wednesday night and the Celtics fell short in a 117-109 loss to the Philadelphia 76ers at Wells Fargo Center.
Jaylen Brown led the Celtics with 26 points, while Marcus Smart finished with 25 points. Daniel Theis recorded his first double of the season with 23 points (10-of-11 shooting) and 10 rebounds off the bench. Kemba Walker dusted off the dust from his season debut against the Knicks, to score 19 points (5-of-9 from 3) and six assists in 22 minutes of action.

"I definitely feel like I could've [played more]," Walker said after the game. "But really, I'm just working my way back, man. It's going to take some time just to get those minutes up. I'm still trying to get the speed of the game down and I just feel like I'm a little behind, just a little bit. But I'm getting back and I’m not going to rush the process."

Joel Embiid netted a game-high 42 points (17-of-21 free throws made), 10 rebounds and Tobias Harris scored 22 points. Shake Milton added 16 points and Ben Simmons chipped in 11 for the Sixers, who are now 10-5 and have sole possession of the best record in the East.

"He's going to score some, but 42 is too much," said coach Brad Stevens of Embiid. "I thought not only did he score those points, he also handled the double team pretty well and on a couple of occasions, it led to 3-pointers."

After a back and forth first half, the Celtics used a 9-0 run late in the third quarter to break a 79-79 tie -- their largest lead of the night. Boston opened up the final frame with a 92-86 advantage before a Harris 3-point play put the Sixers ahead four minutes later.
The Celtics would end up in the penalty halfway through the fourth and Embiid hit a pair of free throws to put the 76ers up 104-103 with 5:03 left. Boston was outscored 13-6 to end the game, despite getting within two with 2:50 remaining; the closet they'd get the rest of the way.
Philadelphia hit 36-of-45 free throw attempts, while the Celtics only attempted 20 and made 13 of them. Boston also committed 16 turnovers to that led to 15 points for the 76ers.
Boston was without Jayson Tatum for a third straight game, due to being in the league's health and safety protocol, but could return to the lineup on Friday when the 8-5 Celtics play the back end of their two-game mini series in Philadelphia.
Tip-off between these two teams is at 7:30 pm EST on ESPN.
Game Notes:
The Celtics shot 47.2% from the field and out-rebounded the Sixers 57-48, plus outscored Philadelphia in the paint 42-38. Boston was also called for 29 fouls to the Sixers' 20.
Joel Pavón
Follow @Joe1_CSP