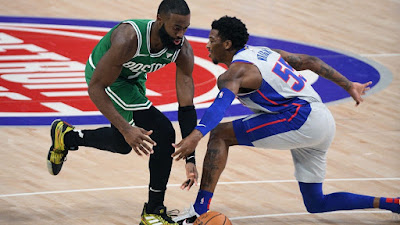 It was a slow start for the Celtics to kick-off 2021, as they fell short of their comeback rally against the Detroit Pistons, 96-93 at Little Caesars Arena on Friday night.
The Pistons, who came in winless after four tries, led by as many as 21 and despite losing their double-digit lead temporarily, they were able to hold off the Celtics to escape with a much needed victory.
Jayson Tatum finished with a game-high 28 points on 11-of-24 shooting from the field, while Jaylen Brown scored 25 points but missed a potential tying 3-pointer in the final seconds.

"I don't know what happened at the start of the game," said Celtics coach Brad Stevens. "We just weren't running. "I thought we had a lot of open looks down the stretch, but we couldn't get anything to go down. But that's also a very long, hard-working, well-coached team. They aren't going to be easy to score on."

Marcus Smart netted 13 points to go along with his nine assists and Jeff Teague added 12 points off the bench for the Celtics, who are now 3-3 on the young season.
Jerami Grant led the Pistons with 24 points, while veteran Derrick Rose and rookie Saddiq Bey each contributed with 17 points respectively.
After trailing Detroit 55-40 at halftime, the Celtics turned up the defense in the third and scored nine points off of turnovers to cut the deficit 79-73 heading into the final frame.
Brown scored seven straight unanswered points to start the fourth and give Boston its first lead of the night. A 3-pointer by Tatum put the Celtics up 93-88, with 4:15 left to play -- its largest advantage before the Pistons responded.
Rose hit a running layup to put Detroit back on top for good to make it 94-93 with a 1:20 remaining. The Celtics missed their final 10 shots and went scoreless following their biggest lead, going ice cold at the wrong time.
Bey's free throw made it 95-93 with 25.5 seconds left, and Marcus Smart missed a driving floater to tie the game with 5.6 seconds left.
Plumlee was fouled immediately after grabbing the rebound, but missed the first of two free throws, giving Boston one last chance to tie the game. Out of a Stevens timeout, Brown missed a 27-footer from the right wing.
Even though the Celtics trailed most of the game, they shot 47 percent from the floor to the Piston's 40.9 percent.
Both teams will meet again on Sunday afternoon, as NBA TV will have the tip-off at 3 pm EST.
Game Notes:
Despite the Celtics outscoring the Pistons 50-42 in the paint, they were out-rebounded 56-54 (13-7 on the offensive glass) and committed 21 turnovers. Boston was also 7-of-14 from the free throw line.