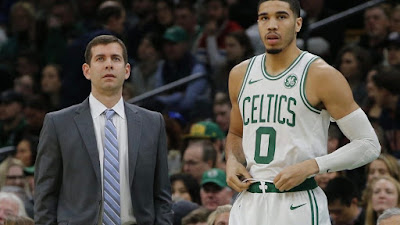 Celtics coach Brad Stevens provided an update on All-Star forward Jayson Tatum's status for Friday night's back-end of a two game set against the Philadelphia 76ers.
On Wednesday, Stevens made his weekly appearance on Boston's 98.5 The Sports Hub and spoke about a possible return for Tatum, who tested positive for COVID-19 nearly two weeks ago.

"Jayson was able to go do his testing and everything else -- all the physiological testing you have to do, yesterday. So he'll be able to be on the court in Boston a little bit today," Stevens said on Zolak & Bertrand. "I don't know what that means over the next couple of days. I think that there would be a chance that he would join us for Friday, but I would say at best that's 50-50."

While Tatum has missed the Celtics last two games, including a blowout loss to the Knicks, Stevens plans to ease his young star slowly back into the lineup similar to Robert Williams III -- who was cleared from health and safety protocol after recovering from the coronavirus.

"And then again, like (Robert Williams), it's not going to be -- he hasn't done anything for two weeks. We're not allowed to have him do anything and he's not supposed to do anything active," Stevens said. "So you have to ramp him back up in some ways. I don't think it's prudent to play a guy several games in a row for 35 minutes per game if he's been inactive for a couple weeks."

The Celtics tip-off against the 76ers tonight and once again Friday on the road in Philadelphia.