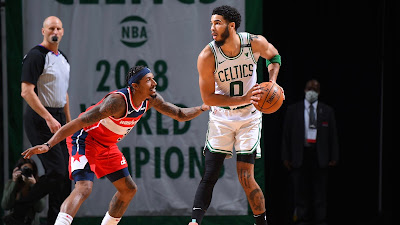 The NBA announced that Celtics forward Jayson Tatum has been named Eastern Conference Player of the Week for the third week of the 2020-21 season.

NBA Players of the Week for Week 3.


Tatum averaged 33 points (shooting 52% percent from 3) and 5.3 rebounds, as the Celtics went 3-0 for the week.
This is Tatum's second Player of the Week nod of his career, after he was recognized as the best player in the East in during the first week of February last year. The All-Star also won Player of the Month for that very same month of February.
Despite being placed in the league's COVID health and safety protocol over the weekend, Tatum was enjoying a great start to the season, averaging 26.9 points, 7.1 rebounds and 3.8 assists -- all career-highs. He's also shooting 47.4% from the field, 43.8% percent from behind the arc and 88.9% from the free-throw line so far in 10 games.
While the Celtics last two games have been postponed (Heat and Bulls) by the NBA, Tatum is still expected to miss 10-14 days due to being in quarantine.
Joel Pavón
Follow @Joe1_CSP