Kemba Walker says he was "pain-free" in season debut 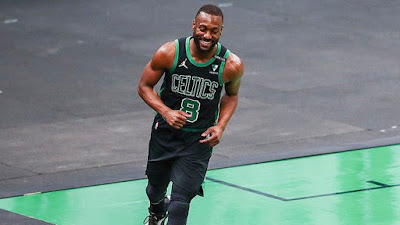 Despite the 30-point blowout at TD Garden, the one bright spot of the afternoon was the long-awaited season debut of Kemba Walker, who hadn't played a game since Sept. 27. The All-Star guard has been rehabbing a left knee injury for nearly a year and now says he's "pain free" for the first time in a while.

"I felt really comfortable making my moves. Pain-free, which I haven't been for a very long time," Walker said after making his return. "It feels weird actually not having pain, if that makes sense. It's kind of a weird feeling. I've been hurt for a very long time so I was really just happy to get out there, just super excited. It was fun, can't wait to get back out there."

Walker finished with eight points on 3-of-13 shooting, four assists and three rebounds in a limited 20 minutes of action. While his stats were not eye popping, which also included five turnovers, the Celtics point guard was more than content to be back in the starting lineup after missing the team's first 11 games.

"I think today my teammates were so excited that I was back, they kind of just sat around and wanted me to do so well and wanted me to shoot and get back right away," Walker said. "I’m just trying to tell them to play ball and not worry about me. We have to get that chemistry back. I've been out for a while, I haven't been playing with the team or practicing much. It's only a matter of time."

After Walker's performance in the Orlando bubble, where he played hurt and through pain, the veteran guard got a stem-cell injection in his left knee during the offseason in hopes of alleviating soreness that effected that limited his play. Following the injection, he and the Celtics medical staff put together a program to help sustain strength in his knee for the length of a season and hopefully into the playoffs.
While the program went into the first few weeks of the regular season, the Celtics were in no rush for Walker to return, as they jumped out to a 7-3 start (best record in the East) before Sunday's loss. If Walker is able to come back fully healthy, coach Brad Stevens gets to integrate another bonafide scorer and ballhandler  into the lineup.

"At one point it was like, mentally that's all I could think about," Walker said. "Like, on the court, in the bubble, that's all I could think about was my knee. Every step I took, every move I made, it was something, even when I wasn’t playing. Now I’m out there and I'm trying to do a step-back and the first thing out of my mind is like, 'Damn, this is probably going to hurt.' Not even worried about making or missing the shot, it's just about the pain.
"Today when I’m out there, I'm making the moves I normally make and I don't feel anything and it's joy. I'm excited. I put in a lot of work. I really attacked my rehab to get where I'm at, and I want to continue to build off this and just try to stay healthy. That's the most important thing."

Though most likely Walker will continue to be on a minutes restriction for the next few games, it will be important to keep an eye on how his knee responds on Wednesday and Friday when the Celtics head out to Philadelphia for a two-game set against the 76ers. Despite Walker wanting to play as much as possible, he knows that there can't be a repeat of last year when it comes to the bigger picture.

"I'm just getting back. We just want to see how my knee reacts after these games and stuff like that. It'll ramp up, though," he promised. "I'll get there. It's no rush. I already took my time coming back, and I'm going to keep taking my time until I'm full go."