A Deep Look at Jaylen Brown's Emergence into a Star 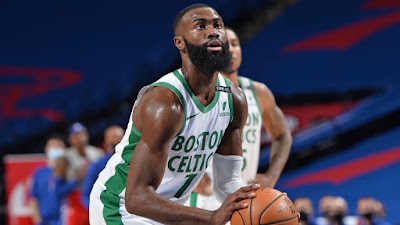 Donning an orange coat revealing a white hoodie underneath, Jaylen Brown was preparing to speak to reporters on Zoom after another tough loss to a conference rival.
Completing Brown's outfit, a black cap featuring a smiley face lurked over the visible disappointment on his face following the Philadelphia 76ers' 122-110 win over the Celtics on a night where he tied a career-high of 42 points.

"A lot of that is on me, I'm one of the defensive leaders and captains on this team. I got to be a better leader on that side of the ball," said Brown at the post-game presser Friday night, dismissing his dominant offensive outburst.

That same defensive-focused and restless mentality he presented during the press conference is something that speaks to Brown's personality. He's never satisfied, willing to put in the work, and always looking to expand his game. Entering his fifth year in the league, Brown's development from his rookie year to now is hard to ignore.
Coming out of college there were plenty of concerns regarding Brown's game as scouts had doubts about what his potential would be.

"[Brown's] not the first freak athlete to come along. If you don't match that with understanding how to play you can float," said one scout featured in a Sports Illustrated article that reviewed the Celtics' first-round pick after the 2016 NBA Draft.

Brown knocked down only 29.4% of his three- point shots in college and there were obvious concerns whether he'd be able to develop a jump-shot in the pros.

"He's got to improve his shooting. He's got to be able to survive the floor as a shooter in some form or fashion," said another scout about Brown, according to C.J. More of Bleacher Report.