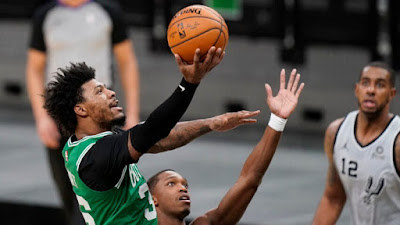 The Celtics were riding on a two-game winning streak coming into the AT&T Center on Wednesday night, as the San Antonio Spurs held on in the final seconds to win 110-106.
Boston's starting five of Kemba Walker, Marcus Smart, Jaylen Brown, Jayson Tatum and Daniel Theis played together for the first time after 16 games this season.
Smart, who finished with 14 points on 6-15 shooting and 2-7 from behind the arc, missed the game-tying 3-pointer from the left corner to tie the game with 2.4 seconds left to play.
Tatum led all scorers with 25 points, Brown had 24 (8-19), while Walker also added 14 for the Celtics and are now 10-7 on the year.

"It's been an interesting season," Brown said in his post-game presser. "We've had guys out, guys hurt. We are just trying to put everything together. Tonight wasn't our best night."

DeMar DeRozan scored 21 points and LaMarcus Alderidge had 20 for the 10-8 Spurs. Keldon Johnson added 18 points, 10 rebounds and Dejonte Murray also notched a double-double of 11 points, 11 rebounds in the win.
It was a disastrous second quarter for the Celtics after leading 30-25 to start the period, they only managed to score a total of 17 points. The Spurs hit 14 of their last 15 shots to end the half on a 29-6 run, in which Lonnie Walker IV scored nine of his 14 points during that stretch.
After the Spurs took a 46-43 lead, their first since early in the first quarter, they used a 15-4 spurt to take a 61-47 advantage into halftime.

"They just had their way at the -- 27-of-33 in the paint, that means its too open, "said coach Brad Stevens about lack of defense in the second quarter. "That means it's too easy. We just need to get better at that. The zone helped us, it got us back into the game, but we were going to zone out of necessity tonight because we couldn't stop a nosebleed."

Boston made a run of their own in the third quarter with Tatum and Brown combining for 22 points. The Celtics outscored San Antonio 37-21 to pull ahead 84-82 to start of the fourth.
DeRozan hit two free throws to give the Spurs a 103-101 lead before Brown found Daniel Thies in the lane for a two-handed slam to tie it up with 40 seconds left to play. San Antonio grabbed another lead on a DeRozan eight-footer jump shot with 27.9 seconds remaining.
Murray stole the ball from Walker at the top of the key for a breakaway dunk on the other end, before a running layup by Tatum and a free throw had the Celtics down 107-106. Rudy Gay hit a pair of free throws to give the Spurs a 109-106 advantage before Tatum found Smart in the corner for a potential game-tying 3 in the final seconds.
Boston will have a few days off to re-group before hosting the reigning NBA champion Lakers, as they look to beat Los Angeles at the TD Garden Saturday night. ABC will have the tip-off at 8:30 pm EST.
Joel Pavón
Follow @Joe1_CSP